Moving Images: Daughters of the Dust 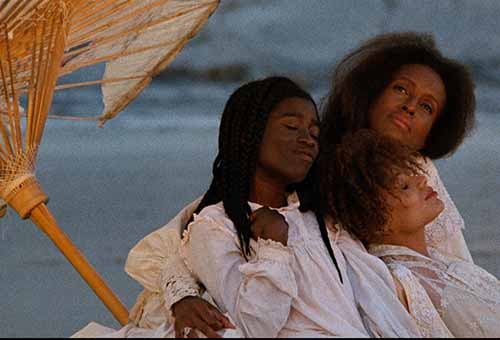 Presented in partnership with Women in Film Cincinnati, this four-part series focuses on films directed by women and celebrates leaders and pioneers both on screen and behind the camera. Each event will close with a discussion with guests from the community and invited guests, including filmmakers and scholars.

DAUGHTERS OF THE DUST

At the dawn of the 20th century, a multi-generational family in the Gullah community on the Sea Islands off of South Carolina – former enslaved West Africans who adopted many of their ancestors’ Yoruba traditions – struggle to maintain their cultural heritage and folklore while contemplating a migration to the mainland, even further from their roots.

With Daughters of the Dust, Dash became the first African American woman to direct and produce a full-length feature film that was widely distributed in theaters across the country. Released with beautiful color restoration in 2016, Dash’s visionary work is still an inspiration for filmmakers today.

Michelle Materre, lead on the 1991 theatrical distribution of Daughters of the Dust, will participate in post-film discussion moderated by Ainsley M. Cameron, CAM Curator of South Asian Art, Islamic Art and Antiquities. Materre serves as Director of the Media Management Program and Associate Professor of Media Studies and Film at The New School, and has a professional background as a film producer, writer, arts administrator, and distribution and marketing specialist.

FREE and open to the public. Reservations not required. Seating is limited and is first come, first served. Cash bar available beginning at 6:00; beverages are permitted in the theater during screening. Please enter the museum through the DeWitt entrance – visitors will meet in the Fath Auditorium.