In honor of National Hispanic Heritage Month (September 15–October 15), the Cincinnati Art Museum joins institutions across the country in paying tribute to the generations of both Hispanic and Latinx who have influenced and enriched our nation and society.

Enjoy these works by or about Hispanic and Latinx artists in the museum’s permanent collection. 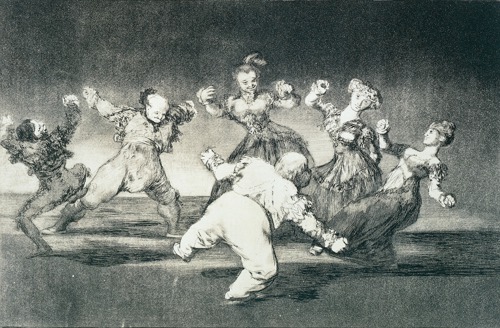 José Francisco de Goya y Lucientes was born in Fuendetodos in the province of Saragossa in 1746 and died in Bordeaux in 1828 at the age of eighty-two while in exile from his native country. Against the backdrop of the Enlightenment and the Napoleonic wars, Goya’s unique genius matured into the foremost Spanish painter and one of the world’s great printmakers.

Goya created four major print series, but only two were publicly issued during his lifetime, Los Caprichos in 1799 and Los Tauromaquia in 1816. His later series, Los Desastres de la Guerra (1810–14, 1820–23) and Los Disparates (ca. 1816–17), were never published during his lifetime because of the fluctuating political climate.

The Spanish word disparate means “folly” in English. Los Disparates remain shrouded in mystery. Goya distills, transforms, and twists the social, political, and religious significance to the point that it defies explanation. His evocative titles and innovative themes remain the most ambiguous and enigmatic of any of his print series. None of the plates were dated nor can they be pinpointed to external events. In 1823, fearing that his prints would compromise his safety when Ferdinand VIII revoked Spain’s constitution for the second time, Goya hid his plates along with those from Los Desastres de la Guerra in his country home and sought a legitimate excuse to flee Spain in 1824. They were later discovered by Goya’s grandson in 1854, but it was not until 1864 that the Academia of San Fernando published an edition of eighteen Los Disparates plates under the title Los Proverbios. The museum’s impression is a proof before the posthumous edition where the rich aquatint tones and delicate drypoint lines have not begun to wear away.

The six dancing figures in Disparate Alegre are no longer the youthful majos and majas gracefully frolicking on the banks of the Manzanares as in Goya’s 1777 tapestry cartoon. They stiffly totter as if sentenced to dance eternally. It has been suggested that Goya satirized the fate of the nobility who offer society neither merit nor service for their honorific and hereditary titles. 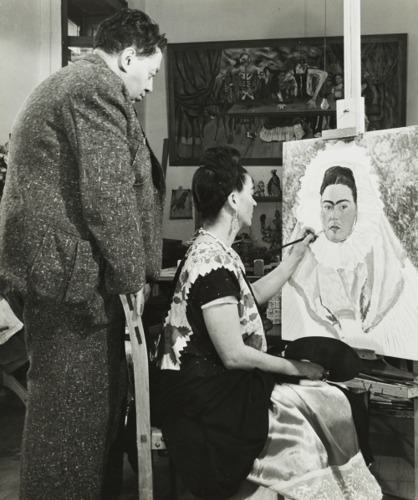 Photographer Bernard Silberstein’s (1905–1999) subjects range from travel destinations to commercial products, but among his best-known photographs are his portraits of Frida Kahlo. Taken at her home in Mexico in the early 1940s, these portraits offer insight into how Kahlo presented herself, a practice of self-fashioning that has made her one of the most recognized artists in the world.

Kahlo is depicted here painting Self-Portrait as Tehuana, also known as Diego on My Mind. She began the painting in 1940, but didn’t complete it until 1943. Her husband, Diego Rivera, stands behind her chair, watching her work. In the finished painting, there is a bust-length portrait of Rivera on Kahlo’s forehead. If the finished version appeared here, the painted Rivera would return the gaze of the man observing Kahlo’s work.

View more portraits of Kahlo and Diego Rivera in our online exhibition Frida Kahlo: Photographic Portraits by Bernard Silberstein in partnership with the University of Cincinnati.

Listen to a museum staff member discuss Kahlo and Silberstein’s work in this CAM Look episode published on September 22, 2020.

In 1941, a retrospective of paintings by the Spanish Surrealist Joan Miró, held at the Museum of Modern Art in New York, sparked widespread enthusiasm for his work in the United States. This mural, painted in 1947, fulfilled the artist’s ambition to produce a piece of public art, and proved decisively that he could adapt his intimate vocabulary of organic forms and delicate linear arabesques to a monumental painting more than thirty feet long.

Following the recommendation of the Cincinnati Art Museum’s Director Philip Adams, Jack Emery (scion of Cincinnati’s Emery dynasty) commissioned the work from Miró, contracting its creation through the art dealer Pierre Matisse. The mural was originally designed to adorn the Gourmet Room, the restaurant twenty floors up in the Terrace Plaza Hotel, the shining example of the postwar architectural modernism built for Thomas Emery’s Sons, Inc.

Miró came to America for the first time in February 1947 and visited Cincinnati to examine the site. He executed the mural in the New York studio of Carl Hotly, who recalled watching the artist “combine and fuse a craftsman’s method with artistic adventure.” Relating the mural to the blue sky beyond the windows that would surround it, Miró first painted the blue, textured background. He then drew on it in with charcoal, “dusting off” several versions until he achieved the desired composition. Objecting strongly to any literal interpretation of his work, Miró created an individual response to  experiences, such as the spectacle of flying kites, that inspired some of the elements in the mural. 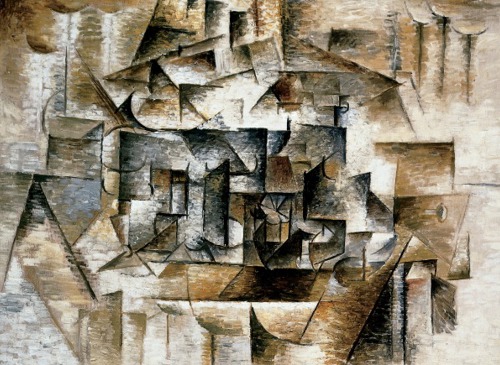 Still Life with Glass and Lemon is an example of Pablo Picasso’s most innovative period of analytic cubism. Developed by Picasso and French painter George Braque between 1907 and 1912, analytic cubism attempted to break down three-dimensional objects into their basic geometric parts, depicting them as if we were viewing them simultaneously from a number of different angles.

At the title indicates, the museum’s painting depicts everyday objects in an almost monochromatic palette: a glass, lemon, table, painter’s palette, rolls of canvas, and curtained windows. However, the composition is so fractured and departs so radically from visual reality that the viewer is left with few reference points. While we can readily identify the curve of a glass, the curdling edge of a roll of canvas, or the uneven contours of the lemon, the painting presents itself as a puzzle that can only be resolved through sustained looking. Eventually, Picasso’s painterly logic emerges: disparate angles and curves give way to unified objects in a single, two-dimensional composition, while the profusion of colored planes forms a rigorous structure. 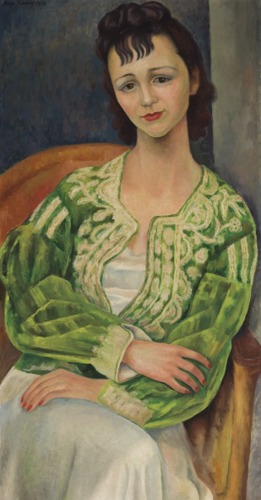 Mary Joy Johnson met Diego Rivera when she worked in Mexico as a buyer for American department stores in the late 1930s. When Rivera asked to paint her portrait, Johnson requested that he portray her in the “combined styles of Modigliani and the ancient Chinese masters.” In deferring to Johnson’s wish, Rivera made a significantly departure from his typically robust, solid figures, softening and elongating the sitter’s features, and adopting a calm and soothing palette.

Diego Rivera was one of the most influential artists of the twentieth century. He played a key role in revitalizing the technique of fresco painting in the United States and Mexico. Rivera is best known for depictions of Mexican history and culture, political and social issues, and the development of industry. 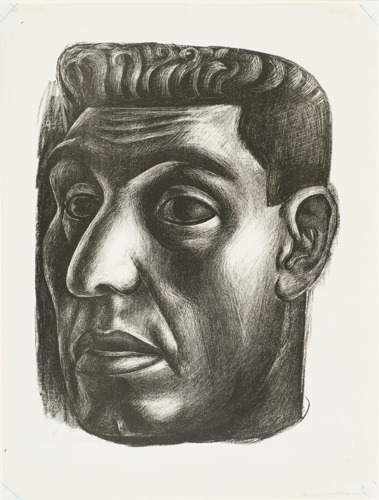 The most politically radical of the trio of Mexican muralists known as “the three giants,” David Alfaro Siqueiros sought to create an art that communicated his Communist ideology to a largely proletarian audience. During his career Siqueiros made approximately twenty-five lithographs and several woodcuts. Like the work of Diego Rivera and José Clemente Orozco, Siqueiros’s lithographs were intended for North American collectors, while his woodcuts reached a broader audience in Mexico, appearing as illustrations in political magazines.

Siqueiros was arrested on May Day, 1903, in Mexico City for being a member of the outlawed Communist Party. He spent the next six months in Lecumberri Prison. Upon his release he was banished from Mexico City and confined for more than a year under “town arrest” in the sleepy silver-mining town of Taxco. Carl Zigrosser of the Weyhe Gallery in New York encouraged Siqueiros to make lithographs. Without the resources for printmaking in the city, the artist sent four of his large drawings to Zigrosser to be transferred to lithographic stones or plates by George C. Miller. This included Girl (Teluantepec Bather), Reclining Nude (Blanca Luz Brum), Zapata and Moisés Sáenz.

Moisés Sáenz was a politically innovative educator who engineered a system of schools in rural Mexico for the education of Indians and Indigenous people. This lithograph is related to a painting that exaggerates Sáenz’s features, isolating and monumentalizing his head to present the man as a timeless presence. Sáenz became Siqueiros’s patron and supporter during a very difficult period in the artist’s life. In all likelihood the drawings, printing proofs, and possibly the stones or plates for the four lithographs were transported back and forth between the United States and Mexico. The printed impressions were sent to Taxco where the artist signed them in September 1931, retaining fifteen impressions for himself and returning twenty to Weyhe. The prints sold well enough in Mexico for Siqueiros to decide in October to authorize Miller to print a second edition of twenty-five. 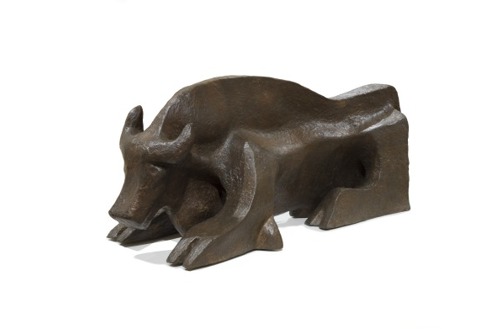 This sculpture’s rugged texture and blocky abstracted form beautifully suggest the power of the bull. The bull’s long and deeply-held associations with Spanish culture appealed strongly to the artist who turned to the subject on several occasions. This late sculpture relates to an earlier work Soriano produced in ceramic. It is the artist’s proof, made as a prototype for an edition of six bronzes.

A painter, sculptor, and printmaker, Soriano is widely hailed as one of the premier Mexican artists of the twentieth century. He was a modernist who refused to be pigeon-holed to any one style and whose subjects ranged from portraits to mythological themes. Beginning in the 1980s, Soriano created a remarkable group of monumental bronze animal sculptures, many for public spaces. He was the recipient of Mexico’s National Art Prize in 1987.

Listen to a museum docent discuss Soriano’s work in this CAM Look episode published on October 14, 2020. 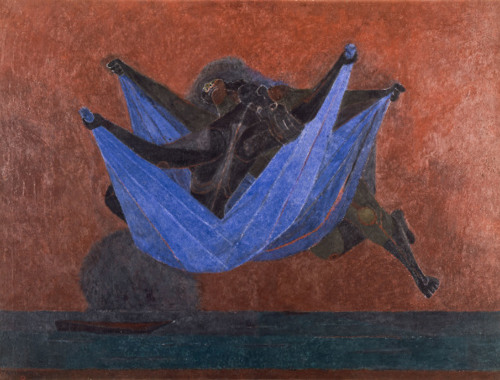 Rufino Tamayo was a Mexican painter and printmaker of Zapotec heritage. Tamayo studied and experimented with European art movements like Cubism, Impressionism, and Fauvism, adapting them through the subjects and styles of his culture.

The elemental forms and mythic figures that populate Tamayo’s compositions stem from the colorful ceremonies and the bold forms of Pre-Coumbian art of his native Oaxaca, blended with influences from European Surrealism. The artist’s sophistication as a draftsman and colorist is evident in the fluid contours, flat areas of color and the complex surface designs of interlocking shapes that distinguish his work.

Listen to a museum docent discuss Tamayo’s work in this CAM Look episode published on June 28, 2021.