So Many Summers Ago: The Photographer and the Athlete

In the summer of 1937, a photographer met a young woman at Camp Huntington in northern Michigan and asked if he could take her picture. Thirty years later he was still trying to find her, to pass on a copy of the photograph he had taken all those years before. 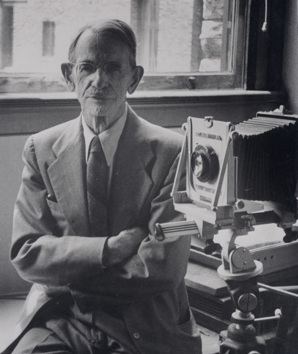 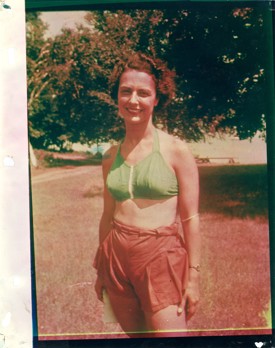 The photographer was Fritz van Houten Raymond, born in 1878 in Finneytown, OH, and this story came to light as I was sorting through the collection of his papers and photographs held here in the Art Museum’s archives. It was his photograph of the woman that first caught my attention. Although there are literally hundreds of photographs in the collection, they almost all relate to Fritz’s work as resident photographer for the Art Museum, a post he held for almost 70 years. And whilst there are a few images of family and friends, this one stood out - it was in color, unlike every other photograph in the collection. Who was this woman, and why did she deserve a color photograph?

There was no information on the photograph to give any clues. It didn’t say when or where it was taken, or who the subject was. More often than not this is the way things go when you’re working with records from the archives – you get a tantalizing glimpse of a story, but never quite the full picture. Assuming this would also be the case here, I put the photograph aside and moved on.

However, as I continued to sort through Fritz’s papers, I found yellowed folder labelled “Tuscan”. Not knowing what to make of the cryptic label, I peered inside, where I found a crumbling envelope. 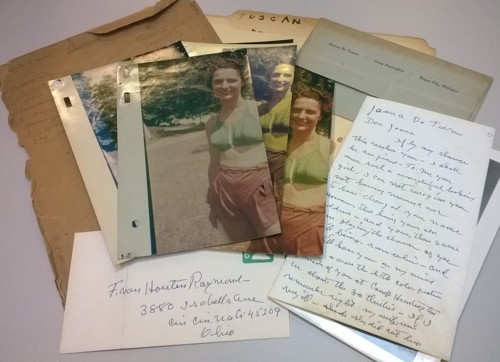 The contents of the mystery envelope.

The envelope contained a number of letters and notes, as well as several photographs - including more copies of the same photo of the mysterious woman! Hoping these might shed some more light on who she was, I was disappointed when they proved to be as uninformative as the original. Distracted by these, I initially didn’t realize the significance of the other photos in the envelope; one of these showed the helmet of a suit of armor, another a barren landscape that looked like the surface of Mars. However, I soon realized that it wasn’t the photographs themselves that were important, but what was written on the back. Using discarded prints as notepaper, Fritz had scribbled down everything he knew or remembered about the woman in the photo, including her name: Joanna de Tuscan.

Fritz met her in 1937, at Camp Huntington on the shores of Walloon Lake, about 5 miles south of Lake Michigan. One of Fritz’s notes mentions that Ms. De Tuscan was in charge of a group of girl campers there, although exactly what Fritz was doing at the camp is unclear. When he snapped Joanna’s picture he promised to send her a copy.

And sometime in 1938, that’s exactly what he did - or at least tried to do. In a letter dated Oct 29, 1938 – the only correspondence I found written by Joanna - she apologizes for her delayed response to his request for a current address as she is now in London, appearing at the Palladium Theatre. This was intriguing. The Palladium is a major London theatre. What was she doing there? Could she have been an actress or performer? Neither the letter nor Fritz’s notes shed any light on this. 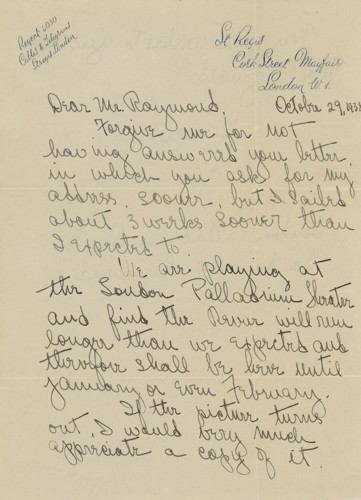 However, after some frantic Googling, I had an answer. Joanna De Tuscan was a fencer, an Olympic fencer in fact, who competed in the infamous 1936 Berlin games, orchestrated by Germany’s Nazi regime. 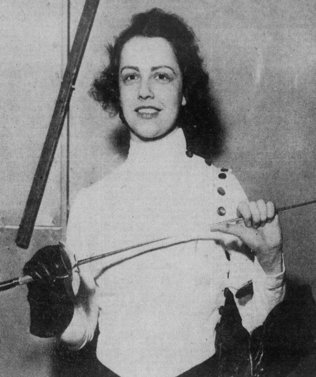 She was born in 1908 into a well-off Detroit family. She was initially a budding artist, studying arts and crafts in Detroit for three years, before attending the Rhode Island School of Design. However, in the late 1920s she began to study fencing with Hungarian fencing master Bela de Tuscan, whom she would marry in 1931.

Fencing soon eclipsed all of Joanna’s other interests. She would go on to win both state and national championships, and became the first woman in fencing history to compete in pants, causing a stir amongst the more traditional members of the fencing community. It’s an interesting coincidence that as I discovered this story another female fencing champion, Ibtihaj Muhammad, was making headlines for her choice of competitive clothing at the 2016 Olympics. 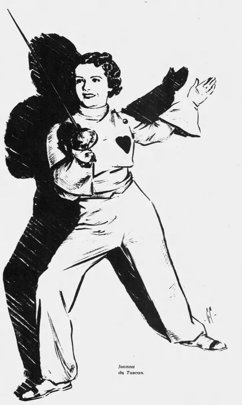 Setting her sights on the 1936 Olympic Games, Joanna moved to New York to take private fencing lessons with George Santelli, one of the coaches for the Olympic team. She not only made the U.S. Olympic fencing team, but became its captain. Although the team ultimately returned without a medal, Joanna made the most of her time in Berlin, including the dubious honor of attending a party staged by Adolf Hitler!

After the Olympics, Joanna turned away from competitive fencing following a minor scandal over payments for demonstrations. It was around this time that she encountered Fritz at Camp Huntington, where it seems likely she was a fencing instructor, though what he was doing there remains a mystery (especially, as he would later note, his wife was seriously ill at the time).

Soon after this, Joanna began to fashion a lucrative career for herself, capitalizing on her fame as an Olympic athlete. She was recruited by a number of companies to advertise their products, including Wheaties, Maxwell House Coffee, and Camel Cigarettes. On one of her Camel ads she is quoted as saying, “I enjoy smoking so much – and I find that with Camels I can smoke often. Camels don’t give me ragged nerves” – it was a very different time!

Together with her husband she also began to tour theatres giving fencing demonstrations, one of the highlights of which was a duel with electrified foils on a darkened stage. It was during a European tour of the show that Joanna took time out to write her letter to Fritz from the London Palladium.

Forced to cut the tour short and flee France at the outbreak of World War II in 1939, Joanna returned to the US and joined the United Service Organizations (USO) Sports Team, travelling to the Pacific Theater of Operations. On her return, she piloted planes for the volunteer Civil Air Patrol (CAP).

After the war, Joanna worked as a fencing double for a variety of Hollywood movie stars, and also taught fencing for Twentieth Century Fox. She remained active well into her 80s, boating, tap-dancing, and giving fencing demonstrations to children.

Whether or not Fritz knew anything of her exploits - before or after their meeting - is unknown, but even 30 years later she was still on his mind. Among the scribbled notes that first revealed Joanna’s identity to me, I found the draft of a letter to her that Fritz wrote in the late 1960s. For whatever reason, he had obviously decided that he would again try to track her down. The letter read:

If by any chance this reaches you, I shall be surprised. To me you were such a wonderful looking girl, I can not imagine you not having married and to have changed your name. However, this being your old address, and your then name, I’m playing the chance of you still being somewhere [available], and I still have you on my mind. I came across the little color picture I made of you at Camp Huntington in about 30s - if I remember right my wife was very ill – she did not live long. I do not think I ever got to sending you the color print. It has now faded and is damaged. However, it has not lost your charm and even at this late date I would like for you to have a reproduction of it. So, if by any chance this old address means anything, let me know, please.

In July 1969, Fritz mailed the final version of his letter to Joanna’s old address in Detroit. It was returned to him, marked “Addressee Unknown”. 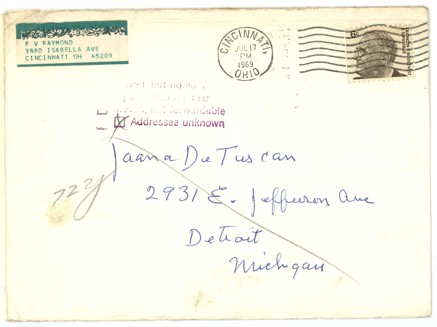 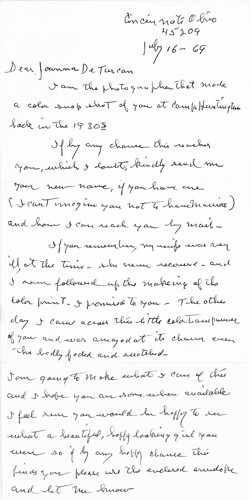 This seems to be the end of the story. There’s nothing to indicate that Joanna ever saw the photograph Fritz took, or that he made any further efforts to track her down. But he did file away her photo, her letter, and his other mementoes of that day in 1937, which he kept until his death in 1979.

Joanna De Tuscan passed away in 2003. She had several children, and I’m ever so tempted to track down any living relatives to see if they’d like a copy of this picture, snapped so many summers ago by a photographer upon whom this energetic, trail-blazing, and colorful woman made a lasting impression.