Terracotta Army: Legacy of the First Emperor of China on view for first time in Cincinnati April 20–August 12, 2018 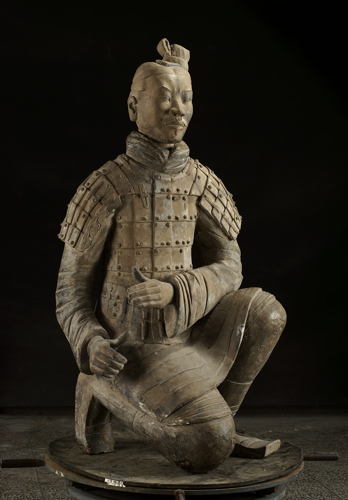 CINCINNATI— The formation and vast influence of China’s landmark Qin dynasty will be showcased in Terracotta Army: Legacy of the First Emperor of China from April 20 through August 12, 2018.

This special exhibition includes 120 objects drawn from the collections of Chinese art museums and archaeological institutes. More than 40 of these works have never been on view in the U.S. before this exhibition.

Expanding upon previous exhibitions, Terracotta Army not only includes the impressive terracotta figures, but also considers important works of art from the Qin’s neighboring states and tells the story of the nomadic peoples of northwestern China.

Dating from 770-206 B.C., these works of art, excavated from the emperor’s mausoleum as well as aristocratic and nomadic tombs, richly reflect history, myths and burial practices in ancient China. In addition to the nine life-size terracotta figures, the exhibition includes a cavalry horse, arms and armor, ritual bronze vessels, works in gold and silver, jade ornaments, precious jewelry and ceramics.

“This international exchange is a momentous occasion for our museum and the Greater Cincinnati region. The original scholarship supporting the exhibition and the opportunity for Cincinnati to learn about the legacy of the First Emperor will be a revelation to every visitor to the museum. We are proud to showcase the splendor of the art and history of China through our ambitious partnership with Shaanxi Province,” said Cameron Kitchin, Cincinnati Art Museum’s Louis and Louise Dieterle Nippert Director.

The Cincinnati Art Museum co-organized the exhibition with the Virginia Museum of Fine Arts (VMFA), where it makes its debut from November 18, 2017 to March 11, 2018. The exhibition is presented in partnership with Shaanxi Provincial Cultural Relics Bureau, Shaanxi History Museum (Shaanxi Cultural Heritage Promotion Center), and Emperor Qin Shihuang’s Mausoleum Site Museum of the People’s Republic of China. Dr. Hou-mei Sung, Curator of Asian Art at the Cincinnati Art Museum, curated the exhibition with Li Jian, the VMFA’s E. Rhodes and Leona B. Carpenter Curator of East Asian Art.

Terracotta Army’s story begins with Ying Zheng (259-210 B.C.), who became the first emperor of China in 221 B.C., after his army defeated other regional states and unified the country. After coming to power, he implemented fundamental cultural, political and economic reforms and established China’s core territory.

In 1974 local farmers digging a well outside the city of Xi’an in Shaanxi province, China, discovered pottery shards and bronze arrows near the mausoleum of Ying Zheng. This led to the astonishing discovery of 8,000 life-size terracotta warriors and horses, which is considered one of the most important archaeological finds in human history. The mausoleum was named a UNESCO World Heritage Site in 1987.

Significantly, the exhibition considers the relationship between the first emperor’s Qin dynasty (221-206 B.C.) and other peoples, exploring their distinctive artistic styles and fostering an appreciation of diverse cultures. The exhibition also provides a glimpse into ongoing excavations and research, which continue to shed new light on the Qin culture and the First Emperor’s burial complex.

“I believe this exhibition will provide a great opportunity for American audiences to understand the daily life of Qin people and the visual culture of the empire more than 2,000 years ago. This exhibition actively promotes cultural exchange between China and the United States, and increases understanding and friendship between peoples of both nations,” said Dr. Zhao Rong, Director of the Shaanxi Provincial Cultural Relics Bureau.

A major scholarly catalogue titled Terracotta Army: Legacy of the First Emperor of China accompanies the exhibition. It includes contributions from the curators and other scholars and features new scholarship and research based on recent excavations.

The exhibition will be on view in the Western & Southern Galleries (232 and 233). Organized with the generous support of the Harold C. Schott Foundation. It is presented by CFM International, and supported by the John and Dorothy Hermanies Fund, the E. Rhodes and Leona B. Carpenter Foundation, Christie’s, Elizabeth Tu Hoffman Huddleston, and the Jeanann Gray Dunlap Foundation.

Tickets for Terracotta Army: Legacy of the First Emperor of China are free for museum members and are available for purchase by the general public at the Cincinnati Art Museum front desk and online at cincinnatiartmuseum.org.

The exhibition includes an interactive activity, family and gallery guides and related programs will be held at the museum throughout the spring and summer. The Art After Dark on Friday, April 27, 5–9 p.m., will be themed by the exhibition and will include free admission to the exhibition. Other events include Family First Saturday: Explore China on May 2, 2017, 12–4 p.m., and the Fourth Annual Cincinnati Asian Art Society Lecture, which will focus on the terracotta army on May 6, 2018, at 2 p.m. Find more information at cincinnatiartmuseum.org/terracotta.