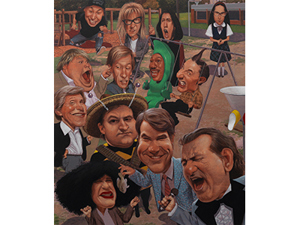 Payne is best known for his both humorous and poignant illustrations, which have graced the covers of leading publications such as Time, Esquire, Reader’s Digest, Mad and Sports Illustrated. Over his career, Payne has also received many honors, including the Gold Funny Bone Award from the New York Society of Illustrators.