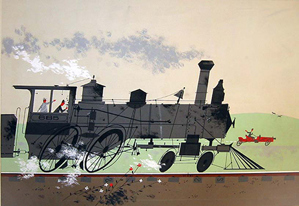 Internationally beloved Cincinnati artist Charley Harper (1922–2007) frequently contributed illustrations to Ford Times, which began publication on April 15, 1908. The magazine’s emphasis was on entertainment, specifically on auto travel in the United States. Harper and his wife Edie created numerous images for the magazine ranging from sight-seeing subjects to the wildlife themes for which he would become famous.

In works such as Mammoth Cave (1953) from the magazine article titled, “Horseless Carriage Adventures #18”, tiny Model-T Ford silhouettes line the horizon, as they do in Harper’s other images of great American landmarks. His whimsical approach to landscape is at once educational and easily accessible, making his work endearing to all ages. Recently designers, artists and nature enthusiasts across America have discovered this locally celebrated artist. Harper ‘played’ with pieces of paper, geometric lines, and layers to develop the style he called Minimal Realism as is evident here. These original illustrations reveal his working process, both in detail and simplicity.

Ford made screen print reproductions of Harper’s images available by mail order during the 50s and 60s. However, the original artwork used for publication, which was made of cut paper, gouache, and ink, was retained by Ford. Ford Times halted publication in 1993. In 2009, the archive at Ford contacted Harper’s only son, Brett, to share his father’s originals, which had been locked away for more than thirty-five years.