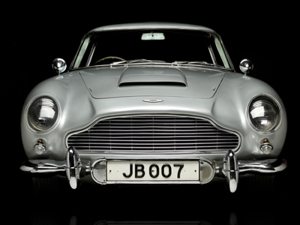 This summer, for one month only, an icon of design, film and popular culture will be on display at the Cincinnati Art Museum: James Bond’s Aston Martin DB5. Owned by a local collector, this car was the stunt car driven by actor Sean Connery in the films Goldfinger (1964) and Thunderball (1965). In true 007-fashion, it features a revolving license plate, tire-slicing wheel caps, console-activated oil slick, smoke screen, bullet shield, front end machine guns, and the infamous ejector seat trigger button. Yet, stripped of all of its gadgets, it still stands as an icon of design—sculpted to seduce with killer lines and looks.