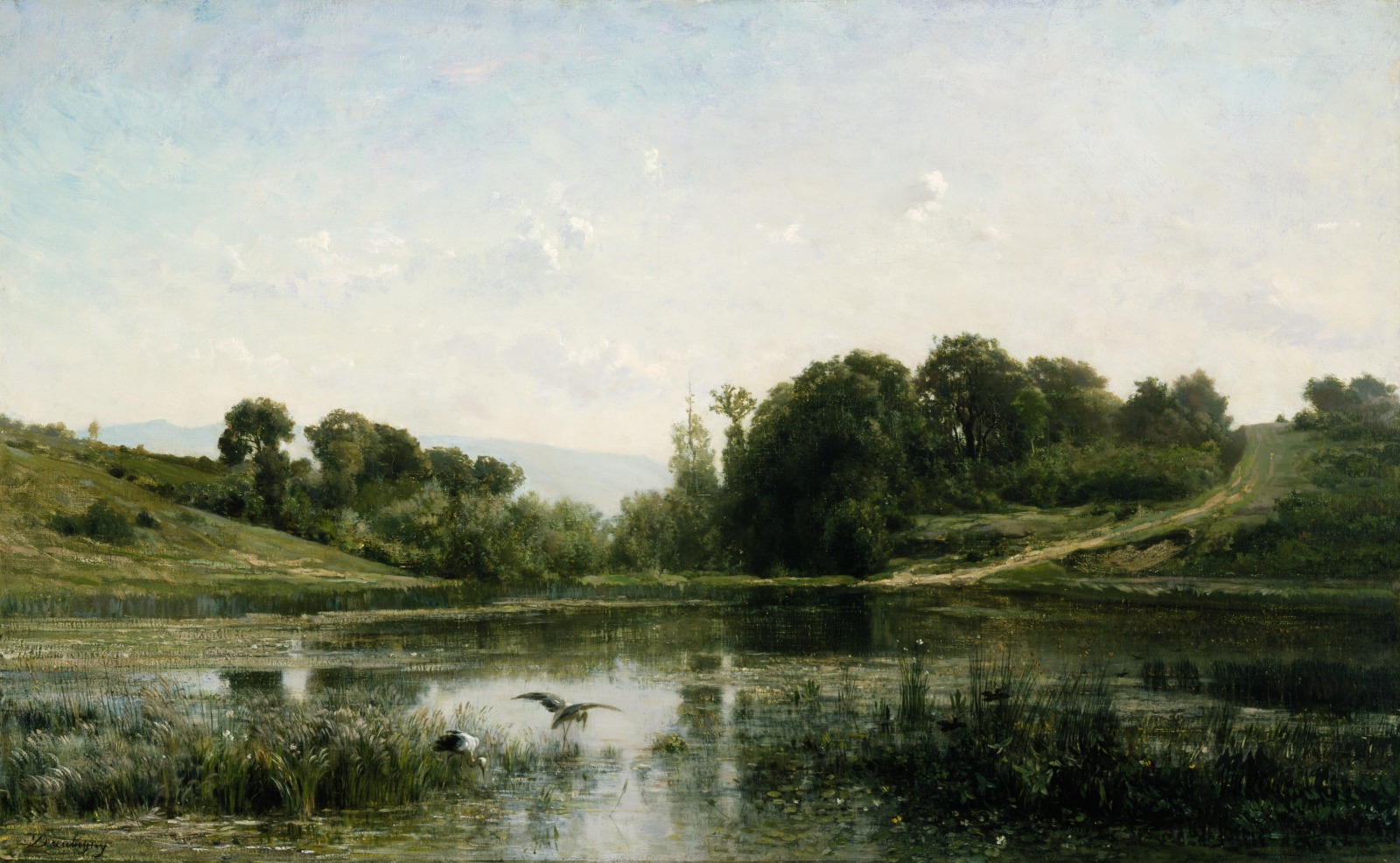 Name:
The Pond at Gylieu
Artist:
Charles François Daubigny (French, b.1817, d.1878), painter
Date:
1853
Place:
France
Medium:
oil on canvas
Measurements:
24 1/2 x 39 1/4 in. (62.2 x 99.7 cm)
Classification:
Painting
Department:
European Paintings, Sculpture and Drawings
Credit Line:
Gift of Emilie L. Heine in memory of Mr. and Mrs. John Hauck
Provenance:
Napoleon III [Louis Napoleon Bonaparte, 1808-1873], 1853-? [1]; Firmin Rainbeaux, dby descent to [2], Félix Rainbeaux. Probably John Levy Galleries, New York, or Schneider Gabriel Galleries, New York, before 1940, probably sold to [3]; Emilie L. Heine, Cincinnati, by at least 1940-1949, given with life interest to; Cincinnati Art Museum, 1949-present. Notes: [1] Napoleon III acquired the painting at the Paris Salon 1853, no.328. [2] Firmin Rainbeaux was Napoleon III's equerry. See: "La Succession de M. Félix Rainbeaux," Beaux Art Magazine, October 16, 1936, p. 4. [3] Albert K. Schneider worked as Emilie L. Heine's dealer for many years. He and Gilbert Gabriel worked with John Levy for approximately twenty-five years before opening their own gallery, Schneider-Gabriel Galleries, in 1938. In 1940 Heine gave a collection of paintings to the CAM with life interest reserved. Schneider-Gabriel Galleries was requested by the CAM to send detailed information on the works that Heine acquired through the Schneider-Gabriel Galleries or John Levy Galleries. The provenance information sent by Schneider-Gabriel Galleries does not offer specific dates of sale, nor does it clarify if Heine purchased the paintings from them or from John Levy Galleries. See: Art Digest, October 1, 1938, p. 11; correspondence, May 25, 1940, July 5, 1940, and October 10, 1949, Heine collection file; Schneider-Gabriel Galleries booklet, Heine collection file, no. 36. [4] Emilie L. Heine, a collector with a penchant for the Barbizon school, began collecting art around 1912 and continued until the mid-1940s. The majority of the paintings were acquired for her Cincinnati home during the 1920s and 1930s, but specific dates of purchase for most are unknown. Heine gave this painting and numerous others to the CAM with life interest reserved in 1940. The Heine collection came to the CAM after her death in 1949.
Accession No:
1940.969

Do you have knowledge to share about this artwork? We’d like to know! Please contact us.
Here’s where we can help with rights questions and reproduction inquiries.