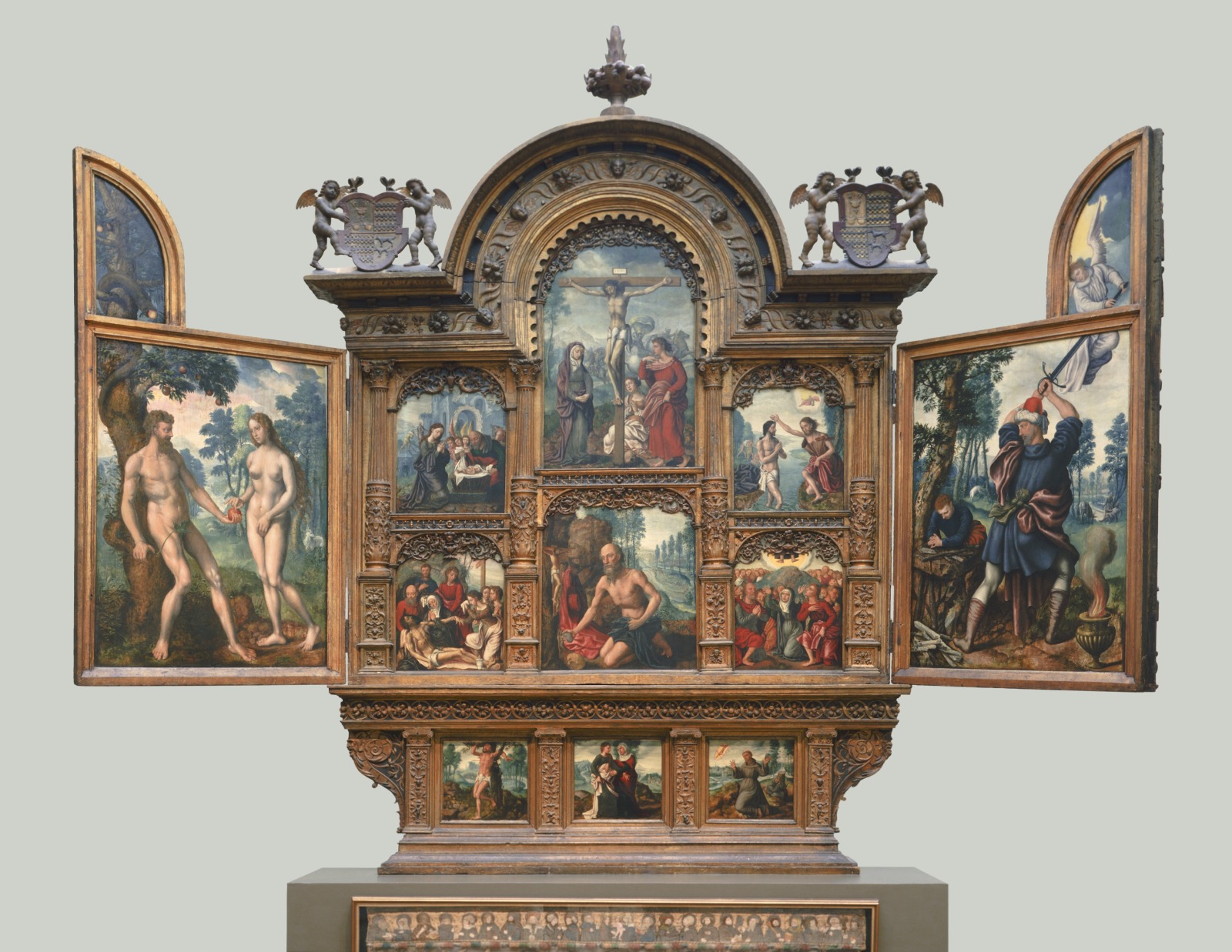 Name:
Altarpiece with Scenes from the Old and New Testaments (the Tendila Retablo)
Artist:
Jan van Hemessen (Flemish, b.Circa 1500, d.1556-1557), painter
Katharina van Hemessen (Flemish, b.1527), painter
Date:
1550s
Place:
Flanders/Europe
Medium:
oil on panel
Measurements:
(altarpiece opened) 139 3/4 x 180 in. (355 x 457.2 cm)
Classification:
Painting
Department:
European Paintings, Sculpture and Drawings
Credit Line:
Fanny Bryce Lehmer and John J. Emery Endowments
Provenance:
Possibly Sotomayor and Arellano lineage, mid-sixteenth century [1]. (Lionel Harris, Spanish Art Gallery, London, ca. 1915). (French & Co., New York, sold to [2]); Reportedly Charles Deering [1852-1927], Spain, probably before 1921 [3]. (Kleinberger & Co., New York, ?-November 6, 1929, sold to [4]); (French & Co., New York, by 1935-1953, sold to [3]); Cincinnati Art Museum, 1953-present. [1] When the CAM acquired the retablo it was believed that the Count of Tendilla, Iñigo López de Mendoza y Figueroa, commissioned it as a memorial to Juana the Mad, mother of Emperor Charles V, and Ignatious Loyola. Two wooden coats of arms, initially thought to be of the lineage Tendilla and Loyola, surmount the wooden frame; however, research provided by the Museo Arqueológico Nacional, Madrid, in 1985, identifies the coat-of-arms to be of Sotomayor and Arellano lineage. This family does have sixteenth-century ties to the town of Tendilla, but the retablo is no longer believed to have been commissioned by the Count. See Mary Ann Scott, Dutch, Flemish, and German Paintings in the Cincinnati Art Museum, 1984, pp. 69-73. [2] Although the provenance of the retablo appears to not have changed ownership during the years 1933-1945, the specific dates of French & Co.'s ownership of the retablo are still being researched. Thus, the altarpiece has been included in the CAM provenance research project. The French & Co. stock number for the retablo is recorded as 39896 on a photograph in the Photo Study Collection, Getty Research Institute. French & Co. loaned the altarpiece to the Brooklyn Museum, Exhibition of Spanish Painting, October 4 to 31, 1935, no. 20. All previous provenance publications for the retablo have listed French & Co., 1935, before Charles Deering; however, considering the collector's life dates and the history of his collection (see fn. 3), it seems more accurate to write the provenance as above. [3] In a letter to the CAM on July 3, 1953, French & Co. commented on their acquisition of the retablo: "We acquired the altar many years ago, and it was sold to Mr. Charles Deering for his palace in Spain. It came back to this country and we repurchased it." Deering built Maricel, a palace in Sitges, Spain, and also restored Tamarit castle in Tarragon, Spain. Both of these, as well as several other Spanish homes in Sitges, were used to house his art collection. Deering left Maricel in 1921, and the palace was emptied. It is not known in which Spanish home the retablo was housed, nor when it left Deering's collection. [4] According to information on a photograph of the painting in the Photo Study Collection, Getty Research Institute, Kleinberger & Co. sold the painting to French & Co. on 11-6-29..
Accession No:
1953.219