Behind the Scenes in Conservation: Crystal Bowl 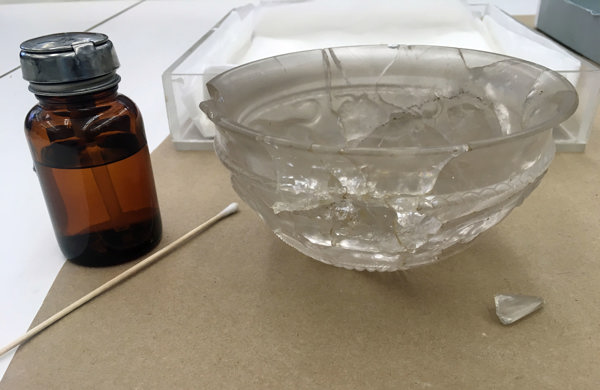 Our objects conservator is conserving this beautifully carved 7th century rock crystal bowl. The adhesive used in its last conservation treatment, in 1956, is starting to degrade, causing pieces to detach. The adhesive used in the past was cellulose nitrate. Though not known at the time, this substance yellows and becomes very brittle as it degrades. When first applied it would have been a clear material, creating a seamless and strong bond between fragments.  Now it is yellow and has lost its adhesive properties. The old adhesive will be removed and the bowl disassembled. A modern conservation adhesive with excellent aging properties will be used to reunite the fragments so it can be displayed long into the future.