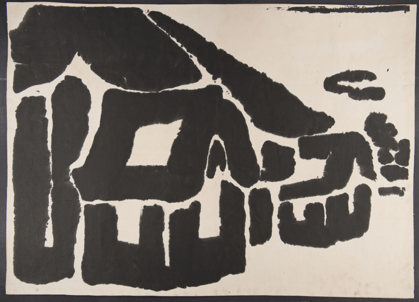 This winter the Paper Conservator has had the privilege of working on a group of Japanese prints by Kōsaka Gajin, an innovative artist whose work combined the traditional woodcut technique of earlier Japanese artists with the bold gestures of post-World War II Abstract Expressionism. Kuromon Gate of the Mansion of Prince Takamatsu, printed in black sumi ink on Japanese paper had been glued to an acidic brown western paper. A negative image of the design has formed on the backing paper because the black ink protected some areas from light, but the uninked areas discolored from exposure to light coming through the print (photograph below left). After removing the bulk of the backing paper (photograph below right), the remaining fibers are being carefully scraped away with the print held flat on a suction table. This print will be on view for the first time in Transcending Reality: The Woodcuts of Kōsaka Gajin (1877-1953) from February 11 to May 7, 2017. 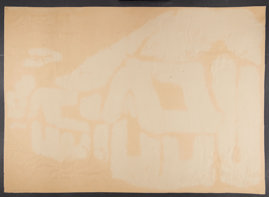 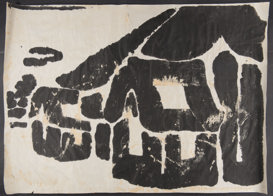