Behind the Scenes in Conservation: A Toolmark 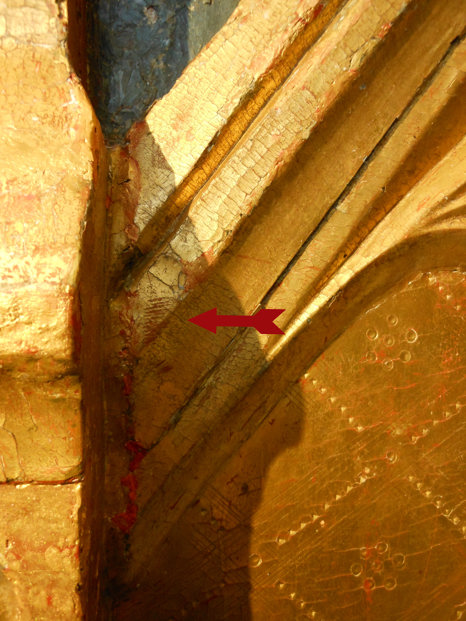 Here’s a photo of a 5” high gilded detail in one of the paintings on wood panel that comprise the Retablo of Saint Peter by Lorenzo Zaragoza, now in the paintings conservation lab.  It has long been known that the eighteen paintings currently comprising the retablo, or altarpiece, were dismantled and reconfigured into the eight more-or-less portable pieces that entered our collection in 1960.  The detail shows the vertical member of the frame, at left, and the painting of the Crucifixion, at right.  Decorative depressions, or punchmarks, in the gold leaf background of the painting are visible at the lower right.  Deep in the shadow cast by the frame is a long, irregular, vertical damage where a dismantling cut was made between the frame and the painting.  The reconfigured join is shown in the process of being inpainted, or retouched.  To the right of the cut line, is a series of fine horizontal scratches in the thin gold leaf, highlighted here with an arrow.  These are no doubt scratches made by the teeth of the saw that was used, perhaps many centuries ago, to make the cut that we can still see.  The toolmark is additional evidence of the vicissitudes of the retablo’s long history and it’s something that will be noted in the conservation file for the altarpiece.