Behind the Scenes in Conservation: Archaeological Glass! 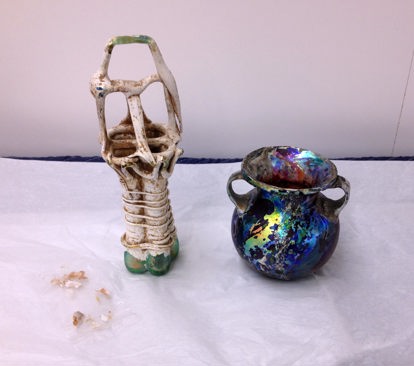 This week in the objects conservation lab: Archaeological glass! These two vessels were both made in the Middle East where glass production is thought to have started. Both pieces are receiving treatment as they exhibit different stages of degradation that formed during burial. The jar on the right dates to the 2-3rd Century, and originally would have been a transparent violet color. Now, the surface has an iridescent rainbow effect and has lost much of its transparency. Although beautiful, this iridescence is a degradation product that indicates a breakdown of the glass structure. The 4th-5th Century glass vessel on the left would have originally been a transparent light green/blue color. An opaque ivory colored crust has formed on the surface of the glass and is actively flaking off, exposing the very thin transparent glass beneath. Both forms of degradation, the iridescence and the crust, are formed when certain elements are leached out of the glass and deposited on the surface. This process weakens the glass until it is so thin and fragile that it collapses. The objects conservator will stabilize the degradation products and maintain a controlled environment to prevent further deterioration of the original glass.