Behind the Scenes in Conservation: Thread Count

This silk chiffon scarf--part of a dress by designer Anna Jeanne Hallée designed in 1924—is undergoing conservation for significant loss and weakness where only shreds and threads remained around the central section. Can you hunt the conservation going on in this picture? 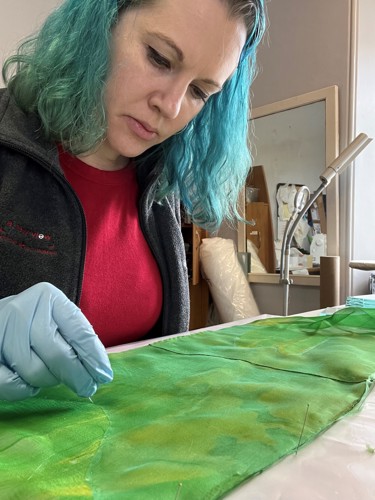 In the second picture, the various conservation “clues” have been highlighted for you: in the yellow circle, you can just see the tip of the tiny, curved needle the conservator is using to stitch down the edge of the top patch. 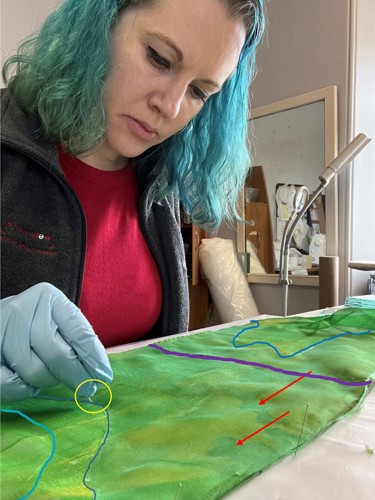 The blue lines show the left and right edges of the top patch. The teal line at the far left is the barely-visible edge of the bottom patch (underneath the scarf).

The red arrows show two of the “fillers”: small, cut-to-shape patches that are sandwiched between the top and bottom and patches and are there to help fill in large voids or losses in the original silk scarf (there are more of them, but they are really hard to see!).

The purple line in the original central seam, now laid over the top patch.

The central seam has survived because the thread was stronger than the original silk chiffon. It has been positioned as close to it original location as possible and stitched down to the heavily patched scarf.

You can also look for the unfinished edge of the top patch at the top edge and a tiny, entomological pin holding it there. We use these super-fine pins in conservation, borrowed from the world of insect-collectors and preservationists because they are so thin, sharp, and made of stable, stainless steel.