Piecing Together an Umbrella Stand by M. Louise McLaughlin– Part I 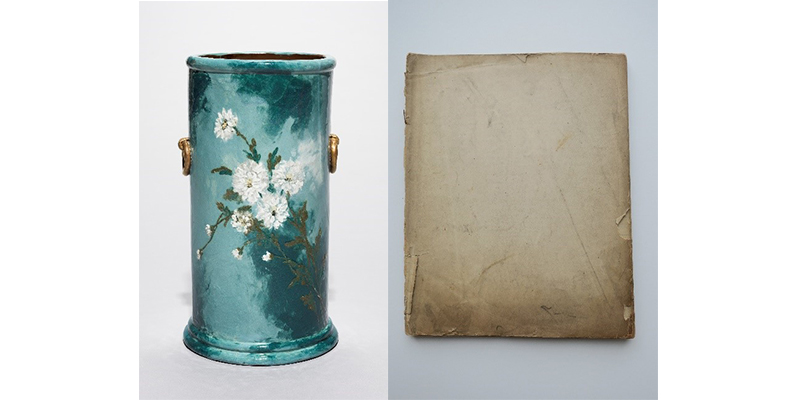 A recently discovered notebook with a third of its contents missing and a ceramic umbrella stand held together with wire—these aren’t exactly the objects that immediately elicit a response of “that belongs in a museum!” Condition is important to us when we consider adding an object to our care. The umbrella stand had been in this state for many years, at least since the mid-1980s when our donor had acquired it. But this is not just any busted up ceramic: it is a large scale, early work by Cincinnati’s Mary Louise McLaughlin (1847–1939), a pioneering artist in decorating ceramics under the glaze and a key figure in the story of the arts in our community. And, the notebook is the previously unknown record kept by McLaughlin of her experimentations with the underglaze decorating technique after her initial successful firing in January 1878. The record book in its present state is 122 pages long, but thanks to another surviving fragment numbered 185, we know that it originally contained at least that many pages.

McLaughlin was meticulous about the information she recorded, treating each object as a trial of her technique. The umbrella stand is the only object of this form that is recorded in the notebook, and the entry is an excellent window onto her experimental practices. It reads:

Greens Victoria (Worcester), shaded with French green and with the mixture green no. 1 white granite.

The umbrella stand appears only five pages from the end of what remains of the notebook, but the number you see, 99 ½, belies the true extent of McLaughlin’s production, as 99 ½ is actually the 342nd logged experiment. It is unclear why McLaughlin chose to designate the umbrella stand as 99 ½ rather than 100, and this is the only time she uses a fraction as the increment in the record. On most objects, the corresponding number is incised into the underside, but not so on this umbrella stand. We were able to identify it as entry 99 ½ by comparing her description of the painted flowers with the surviving object.

McLaughlin painted umbrella stand on August 8th, 1880. It was the only piece she worked on that day, and for good reason. It took her 2 ½ hours of work, while surrounding entries took ½ or ¾ of an hour. Two and a half hours’ worth of work might not sound like much, but the underglaze technique required rapidity. The thick mixture of the white slip (watered-down clay) and high-fire oxide colors was applied in loose, painterly strokes. As layered slip produces a thick impasto creating a noticeable relief in the white flowers and leaves, the result recalls that of an oil painting, appropriate for an artist who self-identified as a painter on canvas.

In her record keeping, McLaughlin always noted the ground colors first, then the pigments (and usually the manufacturer) used for her decorations, which were almost always floral. She had been trained at the Art Academy of Cincinnati to study flowers from life, and visitors to her studio noted the artful clusters of blooms she procured as subjects.

As with any experiment, the outcome matters, and McLaughlin recorded her observations on the relative success (or failure) for each entry. In this case, it’s a mixed bag. The colors are noted as “very fine” but you can almost feel McLaughlin’s disappointment as she wrote that “it cracked at the factory during firing.” A huge percentage of McLaughlin’s wares failed during the firing process. In 1879, McLaughlin calculated that out of 102 objects that entered the kiln, 46 were ruined, a success rate of only 55%.

Despite the fact that it had cracked, McLaughlin still considered the umbrella stand a worthy and valuable example of her work. In October 1880, she displayed it at the Cincinnati Industrial Exposition. After the Exposition closed, McLaughlin kept it in her home for the rest of her life. In her papers, recently donated by McLaughlin descendants, we were delighted to find a photograph that the artist shot of her pet parrot, Teddy, perched on the umbrella stand’s rim. 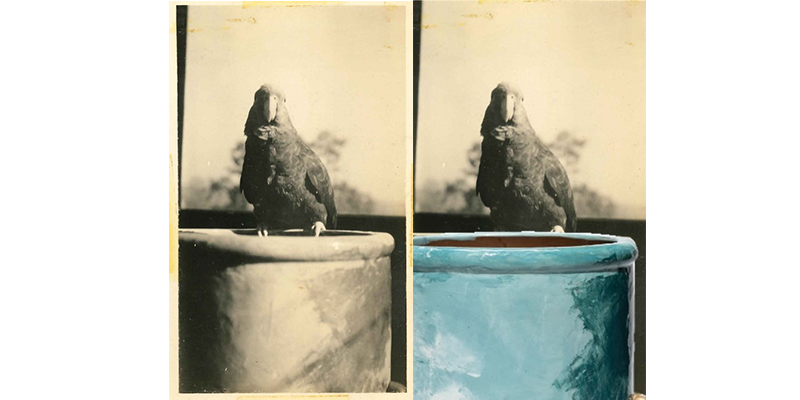 Teddy the parrot, 1900-1938, Mary Louise McLaughlin, photograph, Mary R. Schiff Library & Archives, Cincinnati Art Museum: Teddy was McLaughlin’s constant companion for 38 years and had excellent taste in perches. In this photograph by the artist, he is resting on the rim of the newly accessioned Umbrella Stand.

The crack that appeared when the umbrella stand was fired likely expanded and shattered at some point in intervening years, leaving the object in a rather precarious state. Fortunately, CAM has a skilled team of conservators on staff. Objects conservator Kelly Rectenwald took on the challenge of restoring this important ceramic work to its former glory, and will discuss the process in Part II of this post. Thanks to our donor and to Rectenwald’s successful treatment, the Umbrella Stand will soon be on exhibition once more, this time in Gallery 216 in the Cincinnati Wing. Come pay it a visit!