CINCINNATI— Contemporary South African artist William Kentridge’s More Sweetly Play the Dance will make its North American museum premiere at the Cincinnati Art Museum from April 26–January 28, 2018. The work is a loan from the LUMA Foundation and is presented with lead sponsorship from the Marnick Foundation and additional support from Cincinnati-based FotoFocus and the Millard F. Rogers, Jr. Fund.

This powerful film installation encircles the viewer with seven screens, on which a procession of travelers passes across a charcoal-drawn animated landscape. The immersive panorama hints at multiple histories, evoking a danse macabre, a jazz funeral, an exodus and a journey. Accompanied by a brass band, the film references medieval manuscripts and the storylines of refuge throughout history. 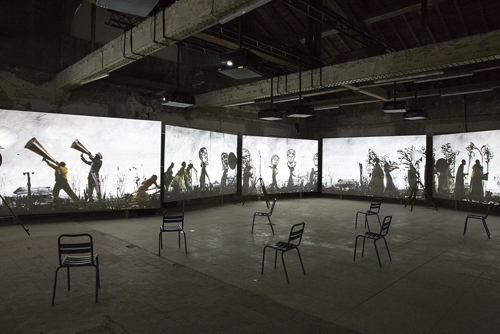 Commissioned in 2015 by the EYE Filmmuseum, the installation melds silhouettes with the artist’s distinctive animated charcoal drawings. Kentridge’s work often begins on a single piece of paper, drawing and then erasing, adding new elements, and photographing his compositions of each state. These images are connected together to create animated figures that pass from screen to screen bringing the film to life. The film is 14 minutes and will be played in a loop. Lightborne, Indyvideo and iNETronics served as key technical advisors.

Cameron Kitchin, the museum’s Louis and Louise Dieterle Nippert Director, comments, “Presenting this spectacular new work by William Kentridge is evidence of an artist in his prime. The relevance of the work to today’s civic discourse is essential and revelatory for our visitors and educators. The Cincinnati Art Museum continues its unwavering commitment to inquiries into contemporary art from all cultures.”

A third-generation South African of Lithuanian-Jewish heritage, Kentridge was born in 1955 in Johannesburg, where he still resides and has his studio. He has earned international acclaim for his interdisciplinary practice, which mingles the fields of visual art, film and theater in a series of overwhelming installations or environments used as a theatrical stage in which the viewer is enveloped by compositions consisting of moving images, music and sculptural objects.

In “A Dream of Love Reciprocated,” in 2014, Kentridge wrote, “My concern has been both with the existential solitude of the walker, and with social solitude—lines of people walking in single file from one country to another, from one life to an unknown future.”

William Kentridge: More Sweetly Play the Dance will be on view in Gallery 105, between the Cincinnati Wing and the newly renovated African Gallery. William Kentridge is represented by the Marian Goodman Gallery.