CINCINNATI— The Cincinnati Art Museum is proud to celebrate Hamilton, Ohio’s own Robert McCloskey (1914-2003) with the special exhibition Make Way for Ducklings: The Art of Robert McCloskey, on view July 20–September 9, 2018. The exhibition delves into the life and legacy of the writer and illustrator of numerous classic children’s books that have captivated readers of all ages for generations. The recipient of two Caldecott Medals and three Caldecott Honors, McCloskey was a major force in twentieth century children’s literature. 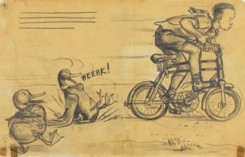 Cincinnati Art Museum Director of Learning & Interpretation Emily Holtrop is curator of the exhibition. “In line with the museum’s mission and strategic plan, the Cincinnati Art Museum is thrilled to welcome a collection of artworks that engage and delight visitors of all ages and generations,” says Holtrop. “McCloskey’s illustrations do more than visually captivate readers—they capture the essence of life’s simple pleasures, reminding viewers to enjoy the little things and savor each day.”

Robert McCloskey was born in Hamilton, Ohio, in 1914. He spent his childhood years in Hamilton and later attended Vesper George Art School in Boston in the early 1930s. McCloskey’s initial artistic attempts were unsuccessful; it wasn’t until he received encouragement from The Viking Press children’s book editor May Massee that his career began to take off. Three years after their initial meeting, McCloskey shared an early draft of his first book, Lentil, with Massee and was met with approval. McCloskey knew he had found his calling.

Also on view will be McCloskey’s illustrations for books by other authors, including Journey Cake, Ho! (1953) and Henry Reed, Inc. (1958). The exhibition culminates with a selection of independent work—watercolors and paintings—that connect McCloskey to such prominent twentieth-century American painters as Thomas Hart Benton and Edward Hopper.

The exhibition includes a family-friendly drawing activity and related programs will be held at the museum throughout the summer. They include: Connect: A program for adults with developmental disabilities and their caregivers on July 28, Gallery Experience: Robert McCloskey with Emily Holtrop on July 29, Moving Images: Robert McCloskey’s Homer Price Stories on August 2, Artist Workshop: Animal Illustrations on August 18, Art After Ducklings on August 31, and Family First Saturday: Make Way for Ducklings on September 1. To learn more, please visit www.cincinnatiartmuseum.org/mccloskey.

Make Way for Ducklings will be on view in the Schiff Gallery and Balcony, Galleries 234 and 235. Admission is free.