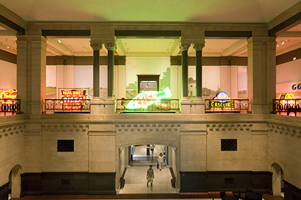 Roads no longer just lead to places, they are places. In the suburban era, sprawl – the outward expansion of American cities – has caused the construction of new roads and elongation of existing ones. The American Road is a response to this expansion. Though several of the scenes may look familiar at first glance, the lack of detail creates an underlying ambiguity. While these landscapes are all of regional locations, they could be anywhere in the United States.

This mural is the product of a group of 9 teen Apprentices employed in the 2010 ArtWorks Summer Program, in collaboration with the American Sign Museum staff and expert sign painters. The large-scale installation will be installed on-site during regular Art Museum hours, June 22-July 23. These five scenes incorporate rendered areas of detail that coincide with flat blocks of muted color, mirroring both the particular and generic aspects of the roads we travel.

Roads have become an unavoidable factor in twenty-first century America, and yet with the increasing amount of time spent on the road, we often drive without noticing the contemporary American landscape that surrounds us. ArtWorks: The American Road will be on view through August 29, 2010.

ArtWorks is an award-winning non-profit that employs teens and artists to work in the arts and enhance the Greater Cincinnati community. ArtWorksCincinnati.org