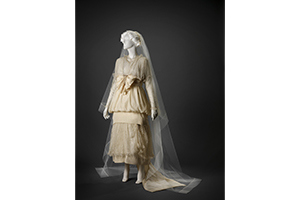 Wedded Perfection: Two Centuries of Wedding Gowns, organized by the Cincinnati Art Museum’s Curator of Costumes and Textiles Cynthia Amneus, unravels more than 200 years of the evolution of the wedding gown paralleled with the social, economic and political status of the women they adorned. Wedded Perfection features over 50 gowns from the late 18th-century to modern designers including Vera Wang, Yohji Yamamoto and Geoffrey Beene. Nineteenth-century economic expansion and the establishment of the bridal industry in the post-World War II era transformed the wedding gown from a symbol of purity to a vehicle for displaying wealth. The exhibition will explore the 21st century bride as the centerpiece of an elaborate theatrical presentation and her wedding gown as an integral part of the spectacle.