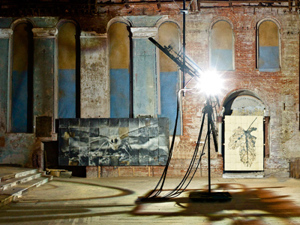 Since well before the Renaissance, light has been used for and understood as a metaphor for illumination, spiritual or intellectual; light is, of course, the opposite of dark. It is also the primary material of photography. In Gravity of Light, Doug and Mike Starn present a compilation of four series of photographs that extend this classical metaphor. Central to the exhibition is a blindingly bright arc lamp, mimicking the sun—a facsimile of Sir Humphry Davy’s “volaic arc” used in the first discovery of electric “artificial light in 1804.

Equal parts sculpture, scientific experiment and photography, Gravity of Light is as much a system of transmissions as it is an exhibition of object photographs. The Starns’ art does not hold the world in suspension as an object for contemplation, but rather suspends the viewer in a world of their own making—a chamber of sensorial and experiential discovery, that renders each of us conductors; absorbers and emitters of the universe’s energy.