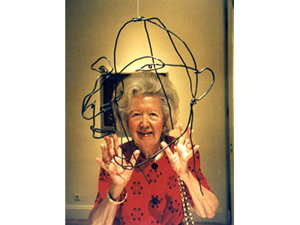 This exhibition of paintings and drawings by Marjorie Schiele pays tribute to this artist, expatriate, and benefactor, and provides an opportunity to view a selection of her work that will join the Museum’s major collection of Cincinnati artists. Schiele, who was Cincinnati-born and educated, but lived most of her life in Paris and Monte Carlo. Schiele studied art in France and traveled extensively until she fled from Europe to New York in 1940 due to World War II. In New York she became a student and assistant to the French painter and writer Amédée Ozenfant. Ozenfant introduced Schiele to a band of expatriate artists which included Piet Mondrian, Fernand Léger, Marcel Duchamp, Lyonel Feininger, and Max Ernst, amongst other notables. Schiele returned to France in 1952 and exhibited her paintings in both solo and group exhibitions, but never forgot her Cincinnati roots. She created an endowment to benefit the Cincinnati Art Museum, from which the Marjorie Schiele Prize was established. The Prize will support an exhibition of paintings and sculpture by a living artist triennially.