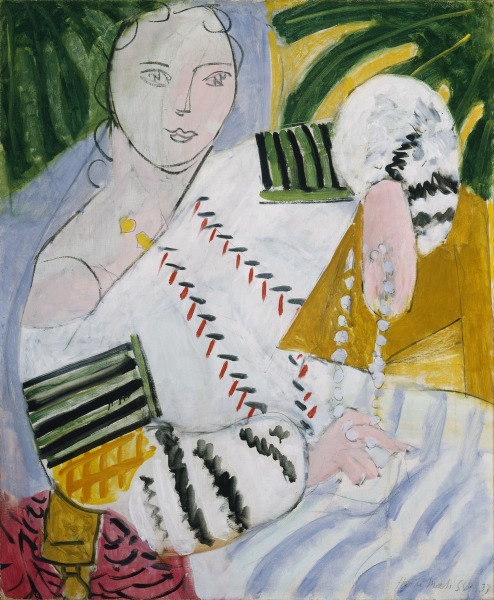 Name:
Romanian Blouse
Artist:
Henri Matisse (French, b.1869, d.1954), painter
Date:
1937
Place:
France
Medium:
oil on canvas
Measurements:
28 3/4 x 23 5/8 in. (73 x 60 cm) Approximate framed dims: 40 1/2 x 36 1/4 x 4 1/4in. (102.9 x 92.1 x 10.8cm)
Classification:
Painting
Department:
European Paintings, Sculpture and Drawings
Credit Line:
Bequest of Mary E. Johnston
Rights:
© 2016 Succession H. Matisse / Artists Rights Society (ARS), New York
Provenance:
(Paul Rosenberg [1881-1959], Paris, 1938, presumably returned to [1]); Henri Matisse, Paris, until October 1938, consigned to [2]; (Pierre Matisse Gallery, New York, October 1938-June 24, 1940, sold to); Mary E. Johnston, Cincinnati, June 24, 1940-1967, by bequest to [3]; Cincinnati Art Museum, 1967-present. [1] Published as being in Rosenberg's collection in Christian Zervos, Histoire de L'art Contemporain, Paris: Cahiers d'art, 1938, p. 172. Previously Madame Georges Bénard, Paris, has been listed as the owner of the painting after Rosenberg. Her inclusion on the provenance was due to a label on the frame that identified her as the lender of a painting, titled Poissons (Fish), to an exhibition at the Carnegie Institute, Pittsburgh, PA. Bérnard probably continued on the provenance because it may have been thought to be an alternate title for the painting; however, correspondence with the Carnegie Institute indicates the exhibition to which Bénard loaned the painting was in 1926, eleven years before the CAM's painting was created. Furthermore, there are no fish included in the CAM's image. Matisse created several paintings of "poisson," and several were of the same or similar dimensions to the CAM's painting. It is seems highly likely that the frame for Poissons was reused for Rumanian Blouse, but the labels never taken off the frame. Thus, Bénard has been removed from the present provenance. See curatorial notation, July 24, 2000. [2] According to the Pierre Matisse Gallery Archives, held at the Pierpont Morgan Library, New York, the Pierre Matisse Gallery acquired the painting from Henri Matisse in October 1938, stock number 1156. Correspondence, June 14, 2001. [3] Johnston actually acquired Rumanian Blouse on approval before May 27, 1940, as a letter from Pierre Matisse to Johnston notes that he is pleased she has decided to keep the painting for a few days. A letter of June 25, 1940, from Matisse states he is happy to know she will keep it and will be sending her the invoice. Pierre Matisse Gallery Archives, The Pierpont Morgan Library, New York.
Accession No:
1967.1427