Behind the Scenes in Conservation: Zaragoza’s Retablo of Saint Peter 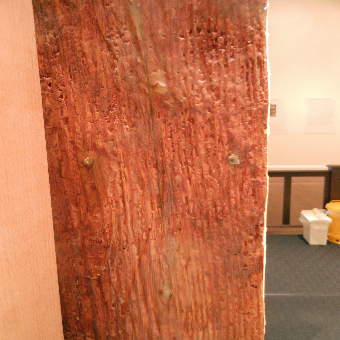 Or rather, behind the paintings in Conservation on View: Zaragoza’s Retablo of Saint Peter.  Even though paintings conservation is on view in Gallery 125 for the next few months, there are still some parts that remain behind the scenes.  For example, this shot shows the reverse of the panel showing Simon the Magician being carried through the air.  The new wood at the left is part of the easel, while in the distance at the right is a view of part of the gallery.  On the wood panel itself are numerous visible holes and vertical tunnels from a past insect attack and the thick, uneven coating of yellowish beeswax that was probably applied before the retablo was purchased in 1960.  More importantly, the two small square shapes of a couple of 600-year-old nails are visible side by side at the center of the photo.  These long tapered nails would have been cut off when the multi-panel altarpiece was taken apart and removed from its original location, assumed to be a church.  Mapping the presence and location of these hand-wrought nails in each panel can help to establish the original structure of the retablo.