The fun part about studying drawings is that you get to see an artist’s initial spark of inspiration and how that first idea changes over time. I am currently researching drawings in preparation for our major exhibition on Cincinnati’s most famous artist, Frank Duveneck (1848-1919), to open in fall 2020. Recently, I examined a sketchbook (2007.563) that Duveneck seems to have used over the course of almost thirty years, beginning with his time in Europe through his later years in Cincinnati.

Within these fragile pages there are at least ten drawings featuring a crowded group gathered around a central figure who clearly has their attention. 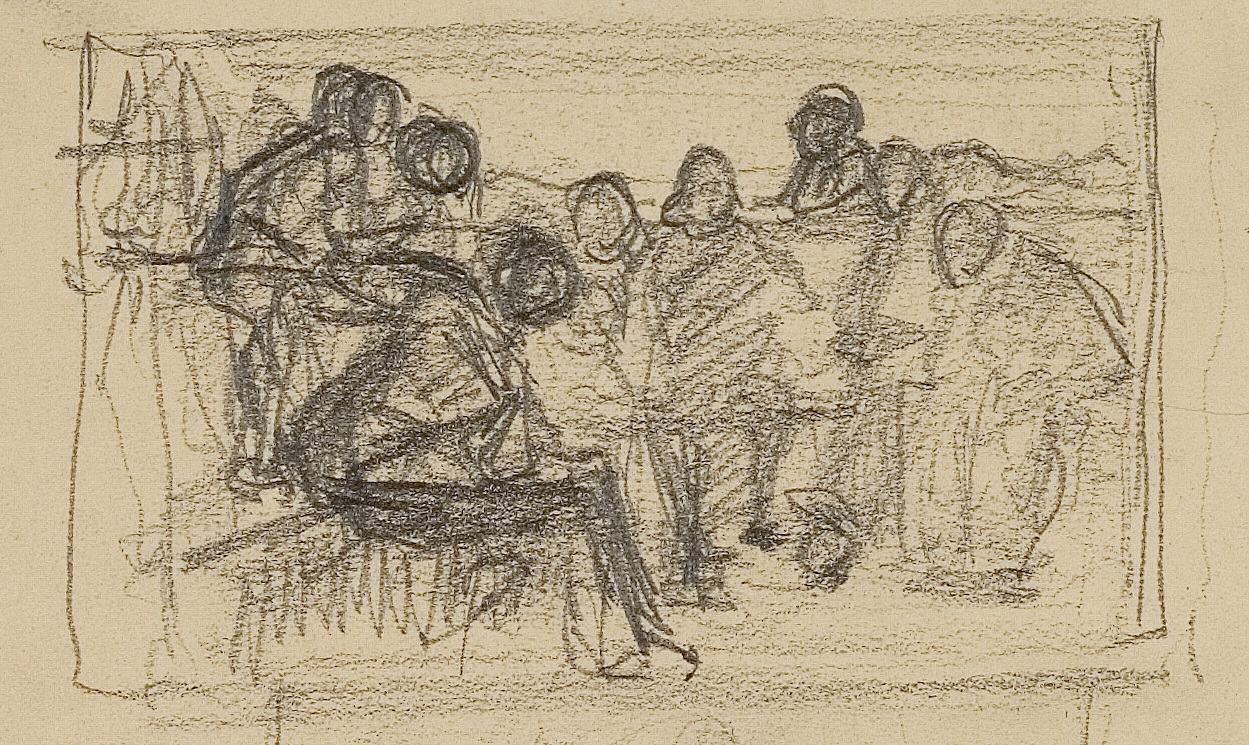 The group is always seated on a long bench in front of a distant horizon, though the figures are placed in different configurations. These sketches relate to a larger project that captivated Duveneck’s imagination when he lived in Venice in the early 1880s. According to his biographer, Duveneck planned to enter a competition to create a mural showing a Reading of Tasso. Torquato Tasso was the Italian Renaissance author of Gerusalemme liberate, an epic poem about the First Crusade that was very popular throughout the 19th century and also became a celebrated subject in Western art. Rather than alluding to the poem’s elite intellectual and artistic heritage, Duveneck shows how the old tale intertwines with everyday life, as common folk relax while listening to this dramatic reading. 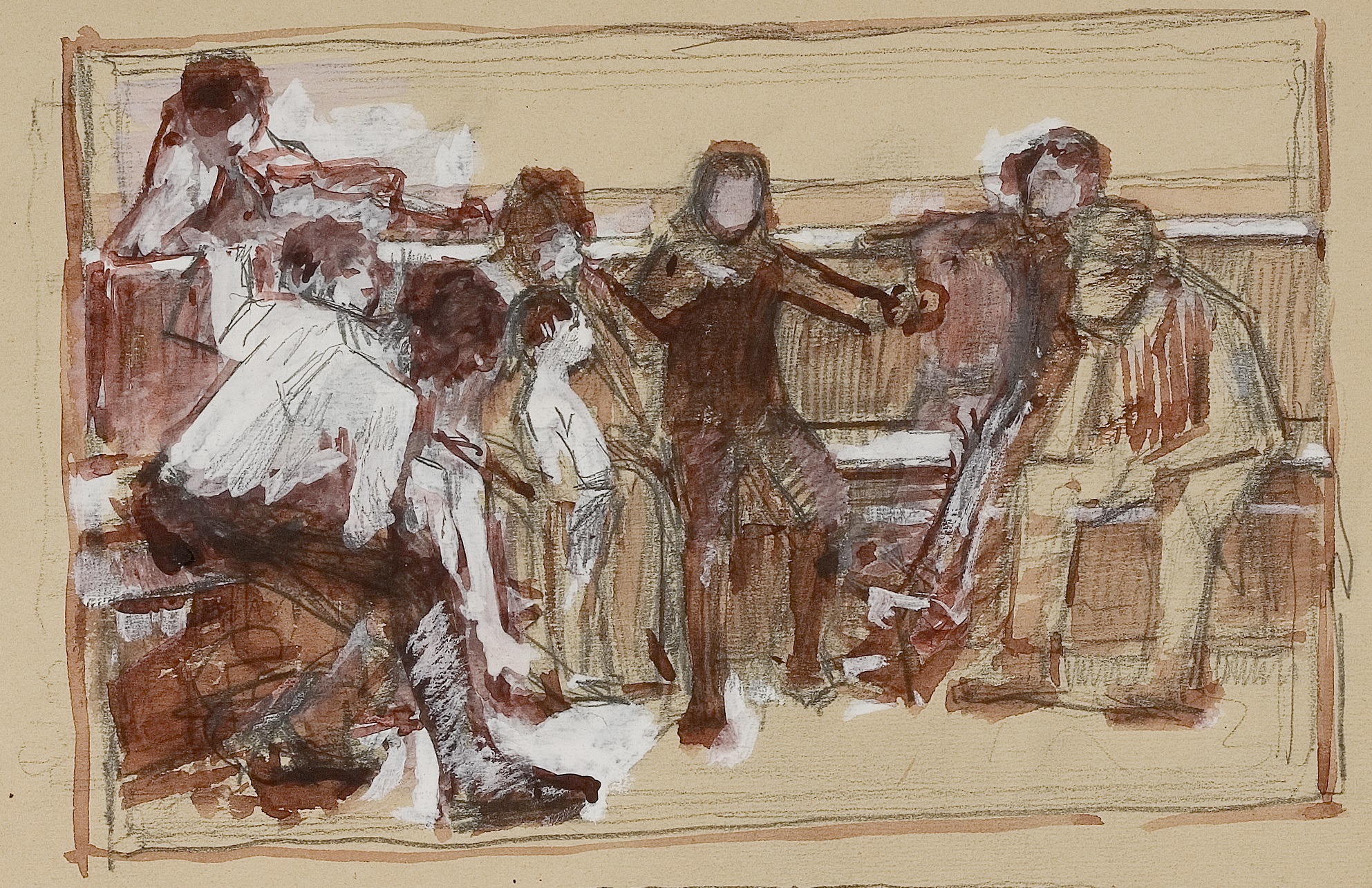 Duveneck must have made these drawings during his stay in the fishing village of Chioggia, near Venice, where he had many models who would pose for him throughout their work day. Our large, unfinished painting Reading to Chioggia Fishermen (1915.123) is one of a series of oil studies for this same subject. 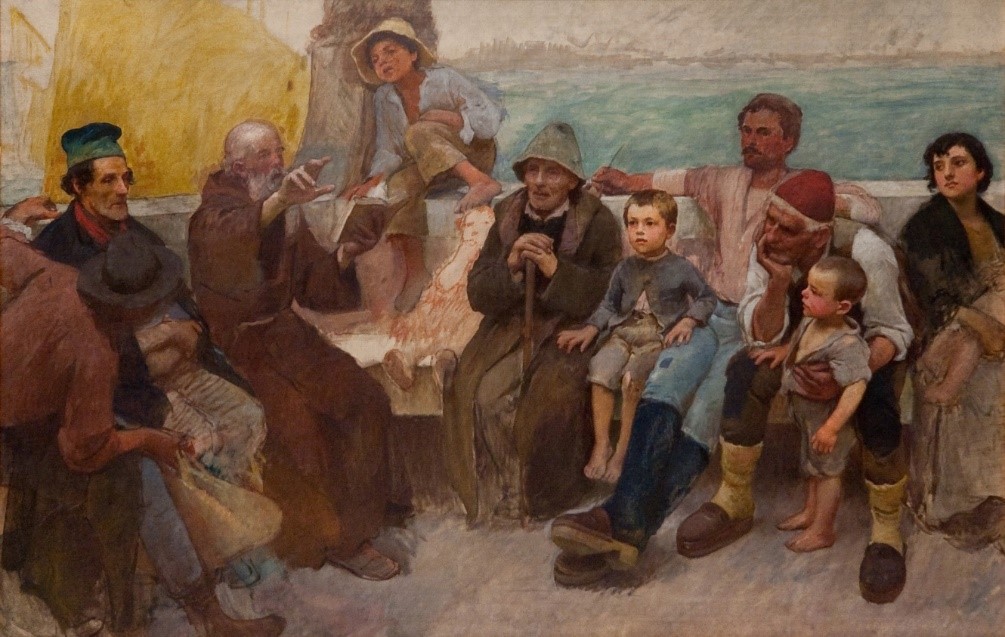 Dated about 1884, the painting clearly connects with his ideas percolating in the drawings. The reader is always the focal point, seated near the central corner of the bench. A listener rests on the ledge above while a figure at right leans forward with his head cupped in his hand. At left, another figure with his back to us leans in to hear the story and in the distance we see a vast harbor. There are also many differences between the various studies. For instance, the age of the central reader changes from young to old between the drawings and the paintings. Duveneck also tries out different dramatic gestures for the reader, switching between a raised right or left hand with a pointing finger or open palm, perhaps based on what moment in the story is being read. Additionally, the positions of the children vary. A main difference in the makeup of the crowd is the inclusion of a woman in the painting.

Photos in the Archives of American Art show us more of Duveneck’s working process for this painting, which is the largest of the series of oil studies for the subject: https://www.aaa.si.edu/collections/frank-and-elizabeth-boott-duveneck-papers-9348/series-6/box-1-folder-34. The photos show Duveneck standing at his canvas painting the contours of the figures as he observes their models in real time. Specifically, we can see that his sitters here include the old man in the floppy hat, the little boy with closely cropped hair, and the woman who appears at the far right in our painting.

Even though we now know that these figures were posed, I believe Duveneck wanted to capture a theatrical moment in the everyday lives of this huddled group. Perhaps they were listening to a particularly dramatic passage, such as:

Their pride and pomp lies hid in sand and grass:

Then why should mortal man repine to die,