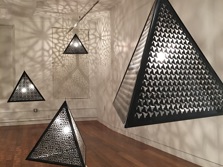 This pop-up exhibition, located inside the Bridgeland Performance Studio on the second floor of The Otto M. Budig Theater, features five laser-cut tetrahedrons lit from within to create an immersive installation. Showcased in the theater’s corner windows, this work will be a shining beacon visible from the BLINK-activated Washington Park across the street.

Agha creates immersive installations by manipulating light. In Alhambra Nights, light emanates from the center of five sculptural forms, creating shadows that intersect and overlap. The geometric and floral patterns of the works are inspired by Islamic architectural design and reference the artist’s formative years in Pakistan, her recent travels to the Alhambra Palace in Spain, as well as her experience of living in the United States, away from her extended family and friends.

Cincinnati Shakespeare Company’s Otto M. Budig Theater, located at 12th and Elm streets, opened in September. During BLINK it is presenting several showings of Dracula and patrons will be able to view Alhambra Nights from inside the building.

This pop-up exhibition and collaboration between The Cincinnati Art Museum and the Cincinnati Shakespeare Company is supported by the loan of the artworks from Aicon Gallery. The New York-based gallery provides a vital platform for Modern and Contemporary art from South Asia and the Middle East.

This will be the second work by the artist featured in Cincinnati. All the Flowers Are for Me (Red) has been on view at the Cincinnati Art Museum since June and was the first purchase from the museum’s Alice Bimel Endowment for Asian Art. This lighted five-foot laser-cut steel cube suspended from the ceiling inside the museum’s Schiff Gallery will remain on view until the conclusion of BLINK.

Agha was named the recipient of Cincinnati Art Museum’s 2017 Schiele Prize. Her light-based installations have been exhibited nationally and internationally in more than 20 solo shows and 50 group shows. She currently resides and works out of Indianapolis.

This season is funded by ArtsWave and is generously sponsored by The Otto M. Budig Family Foundation. Cincinnati Shakespeare Company receives operating support from The Ohio Arts Council, the Shubert Foundation and is supported. The Ohio Arts Council helped fund this program/organization with state tax dollars to encourage economic growth, educational excellence and cultural enrichment for all Ohioans. Production dates and information on the season are available online at www.cincyshakes.com.

The National Endowment for the Arts in partnership with Arts Midwest presents Shakespeare in American Communities. Cincinnati Shakespeare Company was one of 40 professional theater companies selected to participate in bringing the finest productions of Shakespeare to middle- and high-school students in communities across the United States.