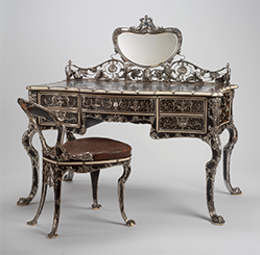 CINCINNATI—Explore a diverse collection of nearly 700 objects created by The Gorham Manufacturing Company, the Rhode Island-based firm that was once the world’s largest maker of silver, in special exhibition Gorham Silver: Designing Brilliance, 1850–1970 on view at the Cincinnati Art Museum March 13–June 7, 2020.

This exhibition explores works created during the company’s heyday (1850–1970), along with original tools, design drawings and several Gorham pieces from the Cincinnati Art Museum’s permanent collection, including a monumental centerpiece with mermaids made for the 1904 St. Louis World’s Fair and a space-age-inspired1960s coffee and tea service.

This dazzling presentation of exceptional silver and mixed-metal wares casts new light on the legacy of Gorham and reflects the industry, artistry, innovation and technological advances of the manufactory for 120 years. Among the showstoppers from the exhibition: a 1903 art nouveau Martelé writing table and chair that incorporates 50 pounds of silver with exotic woods and took over 10,000 hours to complete.

Established in 1831, Gorham rose from a small firm to become the largest silver company in the world, placing uniquely American design on the international stage. Creating everything from commissioned presentation pieces to masterpieces for the dining room, Gorham responded to the era’s desire to celebrate, feast, socialize, honor and simply enjoy the everyday in style.

Gorham was perhaps best known for innovating the use of the steam-powered drop press in its operations, but mechanization was always accompanied by meticulous handwork. The company’s influence in the United States and around the world hit full stride in 1850 (as the exhibition title indicates). After her husband’s presidential inauguration, First Lady Mary Todd Lincoln chose a handsome Gorham tea and coffee service for use in the White House.

“It is a thrill to bring this exhibition to Cincinnati, first, because it is a landmark project that surveys and showcases the stunning achievements of the largest silver manufacturer in history, and second, because there are so many meaningful local ties to the Gorham firm,” says Amy Miller Dehan, Cincinnati Art Museum’s Curator of Decorative Arts and Design.

“When Cincinnatians weren’t buying locally crafted silver, they were buying Gorham. Featured in the exhibition, among several pieces from the art museum’s collection, is the Rebekah at the Well Pitcher, one of Gorham’s earliest examples of hollowware, presented as a wedding gift in 1854 by Cincinnati banker Lewis Whiteman to his daughter, Louisa. In 1872 and 1873, local merchant William Wilson McGrew introduced the crowds who attended the Cincinnati Industrial Exposition to stunning works by Gorham, including an important silver and gold epergne (or centerpiece) featuring Columbia, the female personification of the United States–also on view in the exhibition. And in the 1890s, Gorham was adding lacy silver decoration to Rookwood Pottery,” says Dehan.

On view in the Western & Southern Galleries (Galleries 232 and 233), the 6,000-square-foot exhibition is grounded by a large structure that recalls Gorham’s pavilion at the 1904 World’s Fair in St. Louis, Missouri. Inside is the majority of one of the most extravagant services ever made and the largest commission ever received by Gorham: 816-pieces of gilded silver created between 1866 and 1880 for Chicagoans Henry Jewitt and Elvira Furber.

The Cincinnati Art Museum is the second partner to present this exhibition. Gorham Silver was on view at the Museum of Art, Rhode Island School of Design (RISD Museum) in Providence until December 1, 2019.

A wide variety of programs for all ages will highlight the exhibition during its run, including a special lecture with Elizabeth Williams, RISD Museum’s David and Peggy Rockefeller Curator of Decorative Arts and Design, on March 12, 2020. Self-guided and docent tours will be available. The exhibition will be free during Art After Dark on March 27, April 24, May 29, 2020 and Thursdays from 5–8 p.m.

Tickets for Gorham Silver are free for museum members. Tickets will soon be available for purchase by the general public at the Cincinnati Art Museum front desk and online at cincinnatiartmuseum.org. Photography is permitted, but no flash. On social media, use the hashtag #CAMSilver.

This exhibition is presented by Huntington Bank and Evolo Design and is generously supported by the John A. Schroth Family Charitable Trust. Cincinnati.com/The Cincinnati Enquirer is the media sponsor.

Gorham Silver: Designing Brilliance 1850–1970, originating at the RISD Museum, was made possible by a sponsoring grant from the Henry Luce Foundation with additional support from the Zennovation Fund, the National Endowment for the Arts, the RISD Museum Associates, Textron Inc., the Rhode Island Council for the Humanities, friends and members of the Board of Governors, and a generous in-kind gift from Spencer Marks, Ltd.