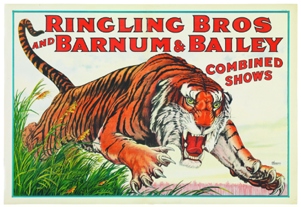 On display in a fantasy gallery reminiscent of the “Big Top” will be eighty circus posters created between 1879 and 1938, along with photographs and circus ephemera. The exhibition will pay tribute to the internationally acclaimed Cincinnati-based Strobridge Lithographing Company, which created and printed the posters and was the leading printer for the major circuses of the time. The posters designed by the firm’s artists were unrivaled for their brilliant color, print quality, and graphic description of the acts and action. They give us a detailed portrait of the heyday of the American circus, spanning from the time of P.T. Barnum’s circus until the early years of Ringling Brothers and Barnum & Bailey. The vivid images and persuasive words reflect the important role outdoor advertising played for circuses, which flourished as vital forms of cultural entertainment across the country.

“The advance advertising of colorful lithograph posters of equestrians, acrobats, clowns, and wild and exotic animals printed by the Strobridge Lithographing Company excited people’s imagination in anticipation of the arrival of American circuses across the country,” said curator Kristin Spangenberg.

The circus spent more money for advertising than on any other component of its operation, and the circus poster was the most important part of its advertising effort. At the turn of the twentieth century, the arrival of the circus was an eagerly anticipated event. The poster was the basic marketing tool for circus entrepreneurs who were quick to take advantage of advances in color lithography. The threefold task of the poster was selling the circus, date, and feature available for a single day. Rural towns and cities were saturated with colorful bombastic lithographic images advertising the circus as it moved from coast to coast. Originally acquired by the Cincinnati Art Museum as historical documents, the circus posters bring back to life the golden years of this American form of entertainment at the birth of outdoor advertising.

The circus advertising--from small posters showing clowns and bearded ladies, to immense billboards pasted on the sides of barns in which aerial feats and new technology exploded into the landscape—were the messengers and are now the record of the transformative world. Strobridge’s custom designed posters delivered the rare and exotic, extremes of human and animal potential, new technologies, gender differences, animalized humans, and humanized animals, attractions that audiences were not likely to see anywhere else. At a time when museums were few and far between, the flamboyant Strobridge circus poster stands were museums without walls and the poster designs laid the groundwork for future generations of graphic designers.

By the late nineteenth century, Cincinnati became the third largest printing center in the country. The forerunner company, E.C. Middleton, was formed in 1847. In 1854, Hines Strobridge joined the company and in 1867 the company became Strobridge & Company. In 1880, the company changed its name to the Strobridge Lithographing Company and decided to specialize in show printing for the circus and theater. By 1884, the business was so successful that the company moved to a larger printing plant on Canal, now Central Parkway in Cincinnati’s Over the Rhine. By the time of the Great Depression, demand for circus and theater posters diminished and the company turned to commercial billboard advertising. In the mind of circus aficionados, however, no printer’s work ever surpassed that of Strobridge Lithography Company of Cincinnati.

The Amazing American Circus Poster is co-organized by Curator of Prints Kristin Spangenberg at the Cincinnati Art Museum and Deborah Walk, Tibbals Curator of the Circus Museum at The John and Mable Ringling Museum of Art in Sarasota, Florida, where the exhibition will be on view from September 17, 2011, to January 29, 2012. The show draws on the Cincinnati Art Museum collection and two major lenders, The Ringling Museum of Art and the Howard Tibbals Collection.

The catalogue for The Amazing American Circus Poster: The Strobridge Lithographing Company will be available in the Cincinnati Museum Shop for $39.95.

The Amazing American Circus Poster has been made possible in part by a major grant from the National Endowment for the Humanities: We the People