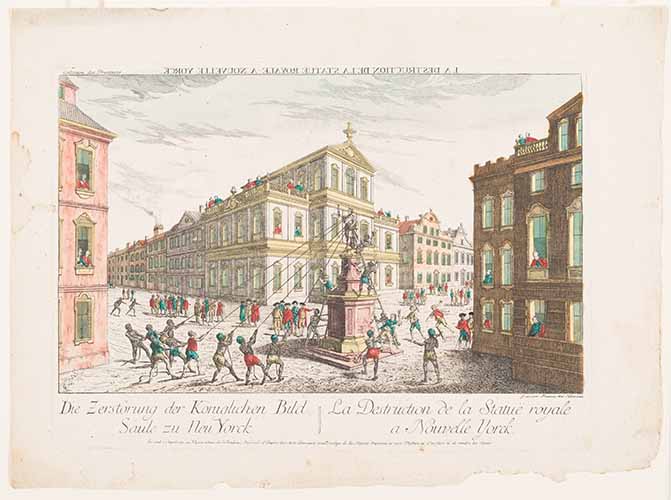 Before the photograph there was the vue d’optique. This print genre was popular during the second half of the eighteenth century into the early nineteenth century. Vues d’optique were specifically designed to provide the illusion of depth when viewed through a zograscope. The zograscope contained a large, double convex lens and a mirror fixed directly behind at an angle. The apparatus was attached to a stand so it was elevated on a table. Specially designed prints with one point perspective were critical for the enhanced special depth when the viewer looked through the lens.

The spectator, whether in an elegant salon or at a street fair, made an imaginary visual voyage for edification and amusement. The cheap, mass produced vues d’optique were a manifestation of the fascination people had of distant lands. A recent gift focuses on approximately twenty-five vues d’optique of North and Central America including Quebec, Boston, New York and Mexico City. The subjects of these hand colored prints were city views and news worthy events.  There is a complete six set of New York City scenes during the Revolutionary war. They are among the last colonial representations of American and include such views as including the city’s catastrophic fire and American rebels pulling down a statue of George III in 1776. Other views include an early depiction of Niagara Falls and the main Aztec pyramid in Mexico City.