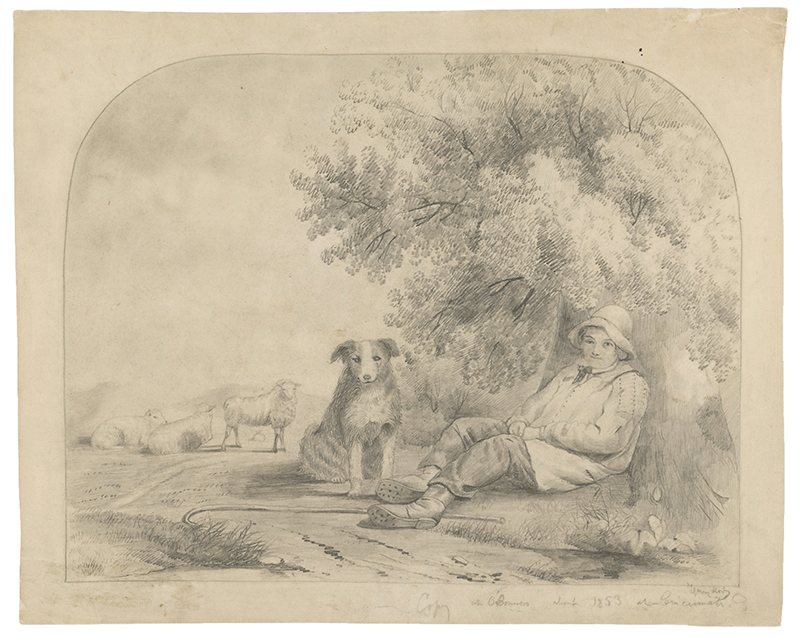 Hello, my name is Susan Scardina. I am a Gallery Attendant at the museum. I will be reading the verbal description for Boy with A Dog from from a group of the artist’s early works in Henry Mosler Behind the Scenes: In Celebration of the Jewish Cincinnati Bicentennial.

Boy with Dog measures 12 and 11/16 inches by 15 and 7/8 inches and is landscape-oriented. The paper is light beige. The central image has a border on all sides, with rounded top right and left corners. On the right edge of the drawing is a large tree with branches and leaves extending across half the image. Leaning against the tree trunk is a boy, maybe 11 or 12 years old. He looks out from the picture with a slight smile on his face. He sits in short grass with his legs extended, but slightly bent, hands resting on his lap in front of him. The boy wears a hat with a soft brim and a light-colored smock with a collared shirt underneath. His trousers are darker than his smock in color. He wears pull-on boots with what appear to be nails or short spikes on the soles. Resting at his feet is a shepherd’s crook. In the center of the drawing, a medium-sized, shaggy dog sits next to the boy. In the background and to the left are three sheep, two sitting and one standing. Two small hills are barely visible behind the sheep.

Hello, my name is Susan Scardina. I am a Gallery Attendant at the museum. I will be reading the label for Boy with A Dog from a group of early works in Henry Mosler Behind the Scenes: In Celebration of the Jewish Cincinnati Bicentennial.

Bucolic visions of rural life appealed to Mosler beginning at an early age. He was about twelve years old when he produced this drawing of a shepherd boy and his dog resting in the shade of a tree. The budding artist likely copied this image from another work of art, a common practice for learning the how-tos. We see him mastering the basics of composition, in which a tree in the foreground frames the view while a deep vista opens up on the left. The feathery tree, with random patterns of leaves in sunlight and shade, suggests a superficial familiarity with artistic convention rather than direct observation of nature. Although the drawing shows promise, Mosler’s inexperience is also evident in the awkward legs of the boy.

Back to the Audio Tour