READY WHERE YOU ARE

Learn more about virtual opportunities to connect while we are temporarily closed. Start exploring

20th Annual Kreines Lecturer to talk about Tattoos and More 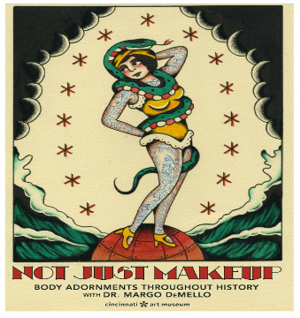 Inked author Dr. Margo DeMello will present Not Just Makeup: Body Adornments throughout History as the 2016 Kreines Lecture at the Cincinnati Art Museum on March 13 at 2 p.m. The Art Museum is predicting a full house for this 20th anniversary lecture presented by Dr. and Mrs. Kenneth Kreines and the Decorative Arts Society of Cincinnati.

Tattoos, their current place in western cultures and their revival in indigenous cultures, will be one focus of the talk. To learn more about this interesting subject we spoke to Dr. DeMello, professor of Anthrozoology at Canisius College in Buffalo, New York, and author of multiple books on body adornment functions in cultures.

“Images from all cultures, overseas and here in North America will be a big part of my presentation,” she said.

“My advisor suggested the topic of tattoos. I was a grad student in Anthropology with a tattoo, married to a tattooist and little had been written about the topic at that time,” said Dr. DeMello. “I got my dissertation and my first book.” (Bodies of Inscription: A Cultural History of the Modern Tattoo Community, Duke University Press 2000).

“Tattoos in tribal societies reflected a communal nature,” said Dr. DeMello, “but in state societies, even as early as the Greek and Roman times, tattoos were used to mark the underclass, slaves and prisoners, so in Western cultures tattoos have been considered déclassé and people having them were looked down upon. Since the 1970s those attitudes have been changing in the United States and England.”

Other body modifications, such as scarification, piercing, stretching, foot binding, and even corseting will also be covered and include ideals of beauty and gender issues in both traditional cultures and our culture.

“I am personally drawn to tattooing,” said Dr. DeMello, “but there are some practices that I find either very beautiful (neck rings) or very odd (suspensions, play piercing).”

Since the Art Museum’s Fath Auditorium only holds close to 300, attendees are being reminded that this free lecture is a first come, first served event. Reservations are not required, but recommended, (513) 721-ARTS.