Behind the Scenes in Conservation: A Japanese Fashion Plate 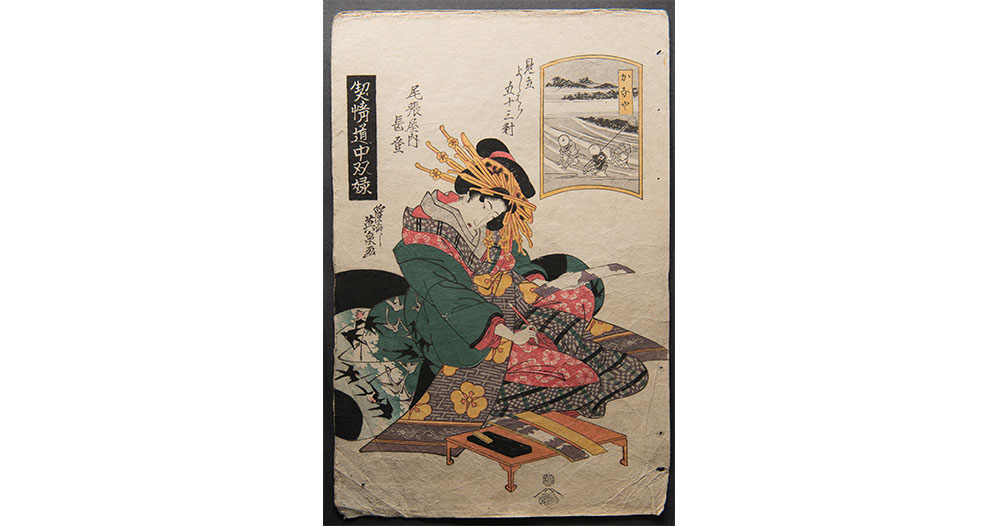 A group of Japanese prints depicting women wearing elaborate garments was recently in the paper lab.  This print is from an album of 54 portraits of courtesans, with small illustrations of stations of the Tokai Road between Edo (Tokyo) and Kyoto, printed from 1821 to 1823.  The woman holding a calligraphy brush and a slip of paper sits in front of a small table with an ink stone and more paper.  Her costume of many layers of contrasting patterns and colors and the more than a dozen hairpins overpowers the monochrome scene in the top right showing three small figures carrying two men and a large box across a river.

The prints in the album show wear on the corners and edges, and the paper around the binding holes along the right side has been stretched as the pages were turned.  Embedded grime in the soft paper could be only slightly reduced, so the focus of the conservation treatment was to lessen the appearance of the creases and to reinforce the paper around the binding holes.  The album was in Robert Frederick Blum’s collection before it was donated to the museum by his sister, after his death in 1903.  These prints will be part of Kimono:  Refashioning Contemporary Style, opening June 28.

Related: Behind the Scenes in Conservation: Modern Glass Japanese Sculpture